Right to Food and ‘A Menu to End Hunger’

Today End Hunger UK released ‘A Menu To End Hunger In The UK’, published by a coalition of poverty, food and campaign organisations, including Sustain. This is a vital call to action, to solve modern day hunger in a wealthy nation. 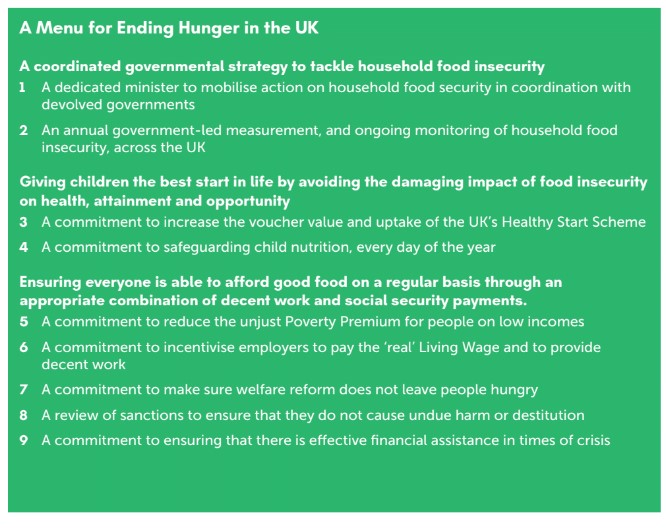 The End Hunger UK report sets out a menu of nine key actions to improve people’s ability to feed themselves through action ‘upstream’, rather than leave people to fall into food crisis and hunger ‘downstream’ and have to turn to emergency food banks to feed themselves and their families. The full report is available online.

Sustain also sees that the Menu to End Hunger as a vital precursor to establishing permanent solutions to hunger, such as by full implementation of the Right to Food.

What is the Right to Food?

The UK has ratified a number of legally binding international standards, including the International Covenant on Social, Cultural, and Economic Rights, that recognise the Right to Food. Unfortunately there is still a gap between this formal recognition and its implementation as the Right to Food has yet to be incorporated into domestic legislation.  All states have an obligation to respect, protect, and fulfil people’s Human Rights. Human Rights are recognised as being indivisible and inalienable, and they belong equally to all.

The Right to Food is defined by the United Nations Special Rapporteur on the Right to Food as:
“The right to have regular, permanent and unrestricted access, either directly or by means of financial purchases, to quantitatively and qualitatively adequate and sufficient food corresponding to the cultural traditions of the people to which the consumer belongs, and which ensure a physical and mental, individual and collective, fulfilling and dignified life free of fear.”

The Right to Food however is not just about food security but also includes a vision for a fair and sustainable food system for all. Food within this system needs to be accessible (financially and geographically); adequate (meets nutritional requirements and is culturally appropriate); and finally available (access to land and sustainability of the food system for future generations).

How does ‘A Menu to End Hunger’ tie in?

The Right to Food overlaps with a number of the steps outlined in the End Hunger UK report, we shall focus on two of them. The first being a call for an annual government-led measurement, and ongoing monitoring of household food insecurity, across the UK and secondly a commitment to safeguarding child nutrition, every day of the year.

The Food and Agricultural Organisation of the UN (FAO) outlines seven steps for a state to realise the right to food. The first of these steps is for the State to take measures to identify the hungry. Food insecurity as defined by the FAO is “A situation that exists when people lack secure access to sufficient amounts of safe and nutritious food for normal growth and development and an active and healthy life.”

In the UK, Emma Lewell-Buck MP’s Household Food Insecurity Bill passed its first reading in November with no opposition, with its second reading scheduled for the 2 February 2018. Estimates show that the additional cost for adding food insecurity questions onto an existing survey would be in the region of £50,000-£75,000 per annum. Sustain has been working on the Measurement of Household Food Insecurity with the Food Foundation, Oxfam, University of Oxford and others.

Insecure food access can have major repercussions on an individual’s mental and physical wellbeing, as well severely impacting their future prospects. By having an annual measurement the government would be better able to develop effective policy based to tackle household food insecurity. This would then enable the state to better fulfil an individual’s right to food.

Children are seen as having specific needs and deserving of specific protections with regards to their Right to Food. This is linked to children’s vulnerable status and the special provisions that need to be made for nutrition in terms of child development. The UN Convention on the Rights of the Child (CRC) outlines some of the special protections accorded to children. This convention that came into force in the UK in 1992 states that:
“Art 24: States Parties recognize the right of the child to the enjoyment of the highest attainable standard of health and to facilities for the treatment of illness and rehabilitation of health. States Parties shall strive to ensure that no child is deprived of his or her right of access to such health care services. States Parties shall pursue full implementation of this right and, in particular, shall take appropriate measures:
To combat disease and malnutrition, including within the framework of primary health care, through, inter alia, the application of readily available technology and through the provision of adequate nutritious foods and clean drinking-water, taking into consideration the dangers and risks of environmental pollution.”

In the 2016 Committee on the Rights of the Child concluding observations on the UK’s compliance with the CRC, child hunger, obesity, and malnutrition were all flagged as issues with recommendations to improve monitoring to better understand the scale of the problem so as to be able to remedy it.

As has been shown by a number of studies and reports, there is currently a significant percentage of children in the UK that are currently living in food insecure households. UNICEF figures show that 19% of children in the UK under the age of 15 live with a respondent who is moderately or severely food insecure, of which 10% are living with a respondent who is severely food insecure. Severe food insecurity means that people are experiencing hunger, and moderate food insecurity means that people are compromising the quality and/or the quantity of their food intake.

Household food insecurity is exacerbated during the school holidays when parents have to stretch their already tight budgets to pay for meals that are normally provided by schools during term time. Frank Field MP’s School Holidays (Meals And Activities) Bill is due to get its second hearing on the 19 January 2018. It is proposed that this Bill would be funded by ring-fencing 10p out of every pound raised by the Sugary Drinks Levy.

The Right to Food project is a collaboration between Sustain, Just Fair, Nourish Scotland, and the University of Newcastle. Sustain’s work on this project is coordinated by Imogen and is funded by the Baring Foundation.