Growing food shapes our countryside, and is now starting to take more prominence in our towns and cities, with the increasing popularity of urban agriculture projects. The spectrum of projects is broad, from large-scale commercial farms to individuals growing salad leaves on a window ledge.

British farming has suffered considerably in recent years, with many farmers going out of business and a lack of young people entering the profession. Farms generally specialise in producing one or two crops, selling to supermarkets or to a large wholesaler. There are farms that are reviving traditions and consciously working to sell their food locally, and want to minimise the environmental impact of their farm and engage with the local community. Farmeco Community Care Farm in Nottinghamshire is one such example.

There are also an emerging number of new small-scale and sustainable farms and market gardens across the UK, such as Fivepenny Farm in Dorset, which is certified organic and grows food to sell locally at farmers markets and schools. Namayasai in East Sussex is a small organic market garden growing Japanese herbs and vegetables, adding exotic and ethnically diverse foods to our definition of local food.

Community Supported Agriculture (CSA) is also an increasingly popular way for farms to link with the community and sell affordable produce. CSA schemes mean that local people can invest in the farm, contributing to costs and labour, rewarded by receiving fresh locally-grown produce. Canalside CSAin Leamington Spa is a successful farm that operates on this model.

Certification schemes such as Red Tractor, Leaf-Marque and Soil Association organic certification are available to ensure specific safety and environmental standards are met during production.

Urban food growing has long been a part of British local food history, with allotments commonplace in towns and cities around the country. In recent years there has been a revival, with more people wanting to grow their own food in urban areas. Land availability for food growing is an issue for many potential growers because of high land rents and soil contamination, and organisations like Landshare are working to connect growers with suitable land.  Local Action on Food also organised an event called Finding the Plot to explore a range of land access issues.

Urban food growing projects are springing up all over the country, for a whole range of reasons. From people wanting to grow and eat more of their own produce, to improving their skills in gardening or food growing, meeting people who live nearby or wanting the rejuvenating mental and physical benefits of being outside and eating the food they have grown.

In London, the Capital Growth campaign is working to transform London, with its plan to create 2,012 new community food-growing spaces by 2012. The campaign has seen new projects flourish in a range of  settings including on housing estates, in schools, universities, prisons, and on rooftops. Blooming Gorgeous Garden in Haringey recently won the Capital Growth School Competition for their food growing site in an urban primary school.

Diggin it in Plymouth is a funded community project that works with volunteers that have mental health issues and disabilities. The project gives volunteers essential skills and training through growing food. It also works with a number of local schools and sells surplus produce in its own farm shop.

The Commonwealth Orchards  project in Scotland sets up community orchards all over the region. It plants fruit trees in towns, cities and villages, to give people access to fruit, and demonstrates how easy it can be to grow good food.

Urban agriculture has many benefits, in terms of fresh food grown locally to the communities that eat it, and maintaining product green space in and around urban areas. However, profitability is one the trickiest aspects to achieve. However, managed properly, locally-grown produce for urban areas can be an attractive and affordable option for many, as well as environmentally sound. Local Action on Food is currently researching how urban food growing projects and urban market gardens can make money by selling their produce.

Manchester the Glebelands market garden, and more recently the Glazebury project, are commercial initiatives growing produce for the well-established Unicorn Grocery and other local box schemes. Sustain and Local Action on Food are working with these growers to help them make their co-operative businesses succeed. Ecoworks  in Nottingham is another example of a community-focused project that has developed a commercial strand.

Meanwhile, In London, the well-established and profitable Growing Communities social enterprise have recently set up a patchwork farm model with small urban spaces and apprentice growers growing produce with a guaranteed market outlet through the Growing Communities box scheme. 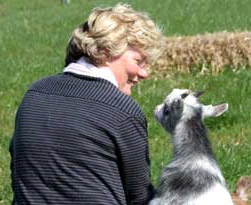 Despite being a third generation farmer, David Rose's farming enterprise, Farmeco, in Nottinghamshire is anything but traditional. Farmeco is a joint venture of four farms which collectively farms around 3,000 acres with communal machinery and labour. In addition to benefiting from the economies of scale that the partnership brings, the farms are working together to make farming more environmentally sustainable, better suited to the needs of local food markets, more wildlife-friendly, and more open to the local community.

One of the member farms, Farmeco Community Care Farm, alongside its more conventional farming activities, aims to educate people on the working countryside. With help from the local community they are building an eco-classroom aimed at teaching young people the importance of farming and food production. The centre is being constructed using primarily natural materials from the local area. “Previously we had nowhere to welcome people or to hold the workshops. The new building will be constructed from straw bales, with triple glazing a green sedum roof and solar power,” explains David Rose. (See the farm's Facebook page for the latest photos). "We see an essential part of this initiative is to educate the wider community and encourage involvement in food production to increase local consumption of produce".

In addition to the educational facility Farmeco has introduced Community Supported Agriculture (CSA; an initiative supported by the Soil Association), which enables community groups to rent an area on the farm and to work with David and his team to set up their own food growing project. 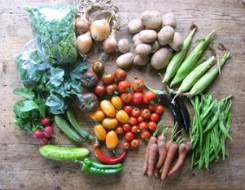 The Canalside Community Food is a CSA or Community Supported Agriculture project – defined by the Soil Association as 'a partnership between farmers and consumers where the responsibilities and rewards of farming are shared'. The farm is based alongside the Grand Union Canal near Lemington Spa and is run by Tom Ingall and his wife Caz who gave over several acres of the farm, all certified organic, to vegetable and fruit production. This area of the farm forms the basis of the CSA and now provides weekly 'shares' of seasonal produce for over 110 local households. Production is managed by a number of full and part-time 'growers', all of whom are self-taught, and CSA members collect their share from the farm or can opt to have it delivered to the local community centre. Alongside their monthly share payment, Canalside's members are encouraged to volunteer a few hours of their own time each year. This usually involves helping with manual work in the vegetable fields, weeding, harvesting etc, but can include helping out at social days and delivering leaflets.

Find out more about the Canalside Community Food at: http://www.canalsidecommunityfood.org.uk/ 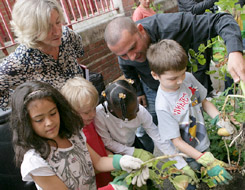 You'd be hard pushed to find a more urban setting for a garden than the one at South Harringay Infants School in North London. Formerly a disused strip of tarmac sandwiched between the school, a public footpath and a main road, the area was littered with rubbish thrown over the fence by passers by.

Keen to start a gardening club for children at the school, many of whom have no outside space at home, parents approached the head teacher and asked permission to transform the area into the school garden. Fundraising activities and a number of small grants allowed the garden to develop and the children now grow a wide range of vegetables, fruit and herbs in a series of raised beds.

Liz Nairn, a senior teacher at the school describes the importance of the garden: “The garden has had an impact on the School Development Plan and teachers now include aspects of healthy living in all curriculum areas. And the weekly gardening club ensures each class has hands-on experience in the garden. The main harvest at the end of the summer term has become a school celebration event with children cooking and serving the food they have grown." The garden has become a hub of school and community involvement, known to parents and children alike as 'The Blooming Gorgeous Garden'.

Photo from: http://www.flickr.com/photos/capitalgrowth/4808287017/, credit to: James O Jenskins
Find out more about setting up a school food growing space from Capital Growth: https://www.capitalgrowth.org 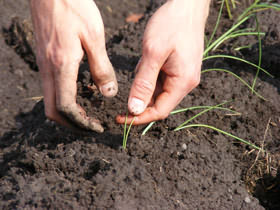 The Unicorn Grocery's Land Project in Manchester started three years ago with a feasibility study that looked into the co-op buying land with a view to bringing the variety and supply of Unicorn's produce more under their control. It then took just six months to find and buy the 20-acre Glazebury plot, about 14 miles from the store.

Finding experienced organic growers proved to be more difficult. “There's a real skills gap,” explains Rob Alderson, a member of the Unicorn Grocery workers' co-operative. This was a daunting project. “It was a blank canvas; there was nothing. No electricity, no water, no buildings.” Undetered and despite no previous growing experience, Rob and Stuart Jones, both Unicorn members, formed a new co-operative business to take on the tenancy at Glazebury.

The benefits of working so closely with Unicorn are clear: “Unicorn is our landlord and our major customer, it provides a guaranteed market,” explains Rob. And as Rob and Stuart both still work part-time at Unicorn they have an income they can depend on while they get the project up and running. In turn, Unicorn and its customers benefit from an improved range of produce which can be harvested as needed. “Fields have the potential to be a winter larder,” says Stuart to illustrate how Glazebury can provide produce to Unicorn 'on demand'.

2010 saw Rob and Stuart crop two acres of land at Glazebury and they plan to increase this to six to seven acres in 2011 as they try out new crops and machinery. Funding from the Big Lottery via the Making Local Food Work programme will enable Rob to work full time from Spring 2011 and to focus on growing the business “We really think this is the way forward - a direct, organic, regional supply, minimising energy use and getting veg from the land to your table in the shortest time possible!“

Find out more about the Glazebury project at: http://www.unicorn-grocery.co.uk/land_project.php