Many members of the Local Action on Food network (the successor to Food Links UK) have interacted with Transition Initiative groups at a local level. Many of their amazing stories (as well as case studies from Sustain's own work with local food initiatives) are told in the new book described below. 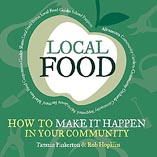 A Transition Initiative is a community working together to tackle Peak Oil and Climate Change, asking: for all those aspects of life that this community needs in order to sustain itself and thrive, how do we significantly increase resilience (to mitigate the effects of Peak Oil) and drastically reduce carbon emissions (to mitigate the effects of Climate Change)? See: the websites of Transition Towns and Transition Culture for more information and how to get involved.

Food is a popular focus point for Transition groups, and this book reports on a host of local food projects all over the country (and internationally) that can inspire more of the same. At the same time, food is a powerful entry point into the broader aims of community transition and, as the book says, "The current growing popularity in food awareness is an opportunity to spread an understanding of transition and bottom-up, cultural transformation."
Find out more about Transition Culture books at the Green Books website.


In January 2008, Food Links UK ran a seminar bringing together food projects from around the country interested in developing work on local food as part of the Transition Towns initiative. Background papers can be downloaded below.