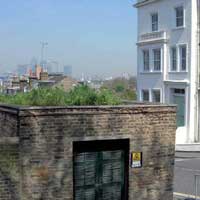 It all began when I escaped the house from hell and moved to a tiny first floor flat in Holloway that happened to have an accessible rooftop.  Not exactly a garden, it was more of a blank grey space, but one that was ripe to become something special.  It was fenced off, able to bear weight and my bedroom had a door that opened straight out onto it.  An oversized balcony with much unrealised potential, it was framed by Mary Poppins views of chimney tops and town houses, and buffeted by birdsong and traffic noise.

It took me a while to get started in earnest.  The roof was appealing but I wasn’t a gardener.  There was much thought but little action for rather a long time.  It was a space for sun dozing rather than vegetable growing for my first summer in the flat, but things changed. I became increasingly interested in urban nature, fascinated by the number of creatures that call London home, and I was starting to understand the environmental importance of urban gardens.

While London is celebrated as being one of the world’s most verdant cities, green space is still endangered here.  Private garden land covers a significant swathe of the capital and is especially precious, but it is under threat.  Creating a brand new garden - turning a bit of grey into a bit of green - suddenly felt really valuable.

So I decided I would transform myself into an aerial edible gardener and attempt to create a true living room - an outside space that would become an important extension of my home.  The roof is three metres square and, despite being sandwiched between the Camden and Holloway Roads, it manages to feel calm.  The plan was to weave green walls around the rooftop and turn it into a fragrant jungle full of vegetables, fruit and flowers.

I didn’t know what I was doing.  I read some books and drew strange diagrams, and then just experimented.  As well as crops that could bear an entirely container bound life – runner bean, tomato, courgette, potato, garlic, radish, strawberry, salads and herbs – I sought out flowers, especially night blooming ones.  Summer evenings on the roof drinking with friends were perfumed by tobacco plant, evening primrose and jasmine.

Spending so much time outside made me even more curious about London.  I wanted to explore her wildernesses and understand more about the wildlife here.  I adventured off into green spaces famous and unknown.  I clambered onto other people’s rooftops and up tower blocks, and found secret gardens and nature reserves in the most unusual places.  I spent more and more time by the river and the canal.

And so I started a website to share my experiences - www.aerialediblegardening.co.uk - and now I’ve written a book.  It’s about the glory of growing things and the ecology of a capital. Its intention is to reveal how much wildlife a city can support, and hopefully inspire you to see built-up spaces in new ways. It’s also an ode to how satisfying gardening can be, no matter how hopeless at it you are.

Helen’s book, ‘My Garden, the City and Me: Rooftop Adventures in the Wilds of London’, is published on 21 June, the summer solstice.