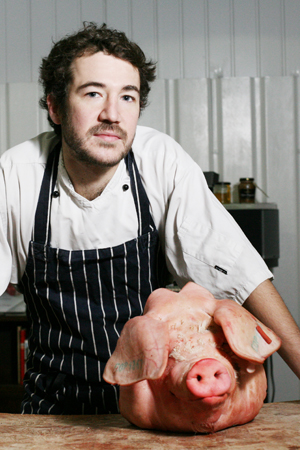 Alan Stewart is a member of the GreenCook Ambassadors network of food professionals, coordinated in the UK by Ethical Eats. The Ambassadors have a wealth of knowledge about the industry and how to create more sustainable dishes and help curb food waste. They explore in practice some of the findings of the tools and research developed by the transnational GreenCook project.

Alan Stewart was previously head chef at the fine dining Manson restaurant in London, and at the Michelin-starred Launceston Place restaurant, part of the D&D group. He is passionate about locally sourced, seasonal and sustainable produce. He specialises in traditional skills such as nose-to-tail butchery, bringing innovative recipes back to the kitchen for exciting menus that also help to reduce waste.

Alan has already helped to train chefs and culinary students in the principles and practice of waste-free cooking, having helped to run a workshop for Ethical Eats at Westminster Kingsway College (see events page for details) and events held as part of Nose-to-Tail Fortnight.

To find out more about the GreenCook Ambassadors, contact: julie@sustainweb.org