Clear nutritional labelling is important to enable people to make healthier food choices.  The existence of two different schemes is confusing, and the use of percentages in one scheme disadvantages the many adults and children that have difficulty in understanding percentages.  We want to see a single scheme which incorporates traffic light colours which are easier for people, especially children, to understand, and can be used to teach children about making healthier choices.

Why is labelling important?

In a country with a rising obesity problem, more and more people are trying to eat healthily.  With the huge variety of foods available, its especially important that people are easily able to work out what is in the food they eat, and how healthy it is.

Currently two different types of front of pack nutritional labelling are currently in use.  The Food Standards Agency (FSA) recommends the ‘traffic light’ labelling scheme, which lists the amount of fat, saturated fat, sugar and salt with easy to understand red, amber and green traffic lights.  This system is supported by retailers such as Sainsbury’s, Asda, Waitrose and the Co-op; and food manufactures like McCain and the New Covent Garden Soup Co.  Food manufactures like Kelloggs, and some retailers have introduced an alternative based on the percentage in each food of someone’s Guideline Daily Amount (GDA) of a nutrient.

Recent independent research commissioned by the Government’s Food Standards Agency (FSA) has shown that having two different schemes is confusing to consumers.  We therefore need one scheme that is used by all manufacturers and retailers on products sold in the UK.

It’s also very important that the scheme used is able to be understood by as many people as possible.  The Skills for Life survey carried out by the Department for Education in 2003 sheds light on problems with the GDA system.  It found nearly one in two adults (47%) lacked the numeracy skills to use percentages correctly in the context of measures and observations. So almost half of adults lack the numerical skills to understand GDA-based labelling.

Nutritional labelling schemes can also be used for food education, enabling parents, teachers and carers to teach children to make healthy choices.  Clear labelling that children can understand is crucial to this.

The FSA-commissioned research also indicated that people are most likely to make use of front of pack nutritional labelling in certain situations, one of which is when shopping for children.  This demonstrates the importance of having an easily understood scheme which helps shoppers to make healthy choices for their children.

In May 2009, the FSA published the results of independent research on front of pack nutritional labelling.  The research confirmed that the labelling scheme that is best understood and liked by consumers uses traffic lights.  It also confirmed that the use of the two different schemes is confusing for shoppers.  However, the findings do not require the food industry to make changes to their own labelling systems.

The Children’s Food Campaign continues to call on food manufacturers and retailers to adopt a single scheme which incorporates the traffic light system recommended by the FSA-commissioned independent research. 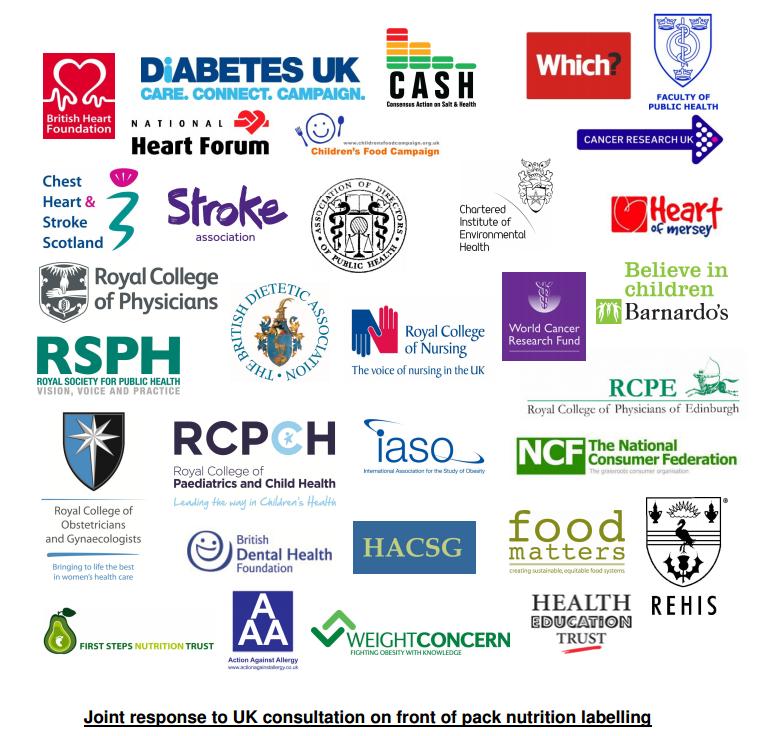 During June-August 2012, the Department of Health conducted a consultation on front-of-pack food labelling. The aim was to be able to recommend a single system of labelling to the food industry, as currently different shops and companies use various forms of labels. We encouraged people to feed into the consultation, sharing what kind of labelling scheme they would like to see and emphashising that traffic light labels should be the standard way of displaying nutritional information on the front of packaging.

Just before the consultation deadline, Tesco announced that it would introduce a hybrid nutritional labelling system which includes a front of pack traffic light colour coding system. Morrisons, Aldi, Lidl and Iceland have subsequently followed suit, meaning that all the major retailers are now on board.

In October the Government announced that, based on results from the consultation, it will recommend a hybrid system, including colour coding and the words high, medium and low. The challenges ahead are both on implementation (CFC are backing the use of the FSA’s thresholds) and on food manufacturers’ unwillingness to join retailers in committing to switch to the hybrid system.

What can I do?

If you regularly buy a product which doesn’t use traffic light labelling, why not write to the manufacturer, asking why they don’t?

For a full list of the retailers, manufacturers, restaurants and caterers that currently use traffic light labelling, see the Food Standards Agency’s pages.

The following organisations and websites provide more information about this issue.

Reports
National Heart Forum (2007) Misconceptions and misinformation: The problems with Guideline Daily Amounts
Department for Education and Skills (2003) The Skills for Life survey

Better food and food teaching for children in schools, and protection of children from junk food marketing are the aims of Sustain's high-profile Children's Food Campaign. We also want clear food labelling that can be understood by everyone, including children.