The Buywell Retail Project worked with fifteen convenience stores in some of London's most deprived areas to encourage people to eat more fresh fruit and vegetables. The stores were selected because of their location in areas that have poor access to healthy food. The project was run as a pilot from March 2009 until March 2010.

The project worked with small independent shops as well as stores that are part of symbol groups, such as Costcutter and Londis. 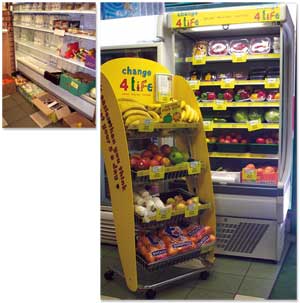 The Buywell Retail Project helped each of the stores to sell more fresh fruit and vegetable by improving quality, range, freshness and location within their store.

Many of the stores involved in the project had never sold fresh fruit and vegetables before. The Buywell Retail Project team worked with each store to offer advice on maximising profits, minimising waste, buying local produce and displaying and promoting the new fresh produce to customers.

Results from the pilot project:

The Buywell Retail Project was run by Rice Retail Marketing, with local partner Tower Hamlets Co-operative Development Agency and was managed by Sustain's London Food Link. It was jointly funded by: