Should we scale-up box schemes and CSAs in the UK? 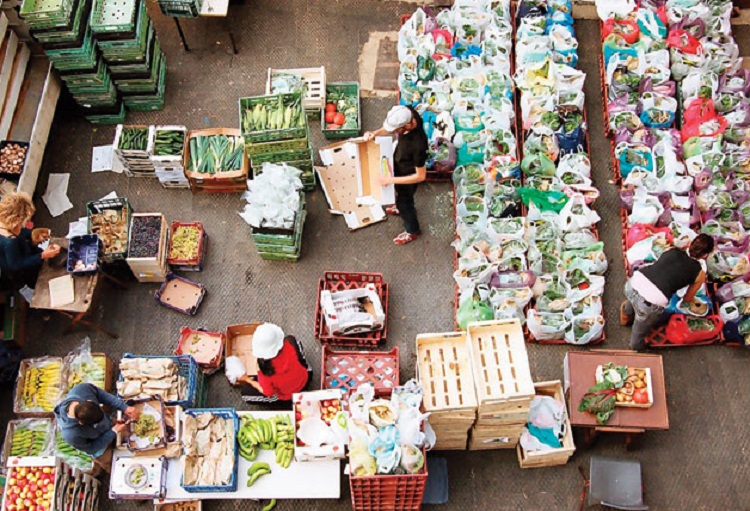 This was the question asked during one of the dozens of workshops held at this year’s Oxford Real Farming Conference. And here Tilly Jarvis shares headlines and reflections on the discussion.

Chaired by Paola Guzman, a PhD student at CAWR focussing on the financial and operational performance of box schemes and CSAs, four experts in the field shared their experiences and views of scaling and whether scaling should even be the end goal of a vegbox scheme or CSA.

Box schemes and CSAs are some of the most common, and arguably successful, business models to commercialise sustainably grown food in the UK. In England there are at least 250 such enterprises. These schemes are part of an alternative and more independent retail sector that is working towards a better food system, but whereas some of these schemes have expanded nationally others remain focused on their local communities.

Guy Watson, founder of Riverford, started growing organic veg on the family farm in Devon, with a wheelbarrow and a borrowed tractor in 1987. His pioneering veg box scheme now delivers around 50,000 boxes a week. Guy shared his story explaining how scaling to this size certainly hadn’t been without its challenges but, he felt, the model had proved successful not only for the now employee-owned business but also for all the organic farmers that Riverford supports. Guy’s thoughts suggest that even though big is often bad, it doesn’t have to be like that!

In contrast, Julie Brown, founder of the Growing Communities veg box scheme, started twenty years ago driven by a mission to provide affordable, sustainable products and services as well as decent livelihoods, rather than to generate excessive profits for others. Julie shared her belief in advocating for sustainable re-localised food systems to see us through the challenges ahead and believes we need to work together with communities and farmers to take our food system back from the supermarkets and agribusiness. The Growing Communities model is working to create wider change through replication rather than scaling up their own operations. Through their start up programme they have so far helped nine other community-led box schemes to start trading and have created the Better Food Traders network. We have long supported the idea of replication as a way to scale and they have shown this is an effective way to grow local solutions that are meaningful and responsive to the character of those areas.

In a similar vein of replication rather than growth Gareth Davies, founding member of Canalside Community Food CSA and board member of the CSA Network UK shared his insights. For Gareth it is the consumer engagement that is critical. He is a passionate advocate of local and seasonal food production as a means of achieving food sovereignty for consumers at the same time as addressing environmental concerns arising from current agricultural production and marketing systems.

And finally Duncan Catchpole is the managing director of The Cambridge Organic Food Company (COFCO) and also leads on the work of Cambridge Food Hub. The COFCO scheme collects produce from many organic farms in and around Cambridge then delivers the boxes in the same locality. Duncan argued the case for encouraging everyone in the food system to learn from the box scheme model rather than focussing on scale. And he’s right. We do need a food system that generates minimal waste, generates minimum food miles, uses minimal packaging, has short supply chains and puts people before profit. But does this mean that we can’t still look to scale up or replicate box schemes?

And the answer is….

So as always there was not enough time to unpack this big issue, but it was great to air the different views. It’s probably no surprise that there was a lack of unanimous agreement in the room about whether and how we should we scale-up individual box schemes and CSAs in the UK; but there was a general consensus that box schemes and CSA’s have and can effectively address problems in the food system. Plus it felt like all those present really want to build more of a movement to represent this sector.

Here at the Food Co-ops network (and more widely at Sustain) we are keen to see more box schemes set up and more people buying from them and have been supporting communities and others to do so since 2008. We look forward to hearing more about the findings of Paola’s PhD and will also be partnering on the Growing Communities initiative to set up a Better Food Traders network. Watch this space and in the meantime:

Sustain: Sustain: The alliance for better food and farming advocates food and agriculture policies and practices that enhance the health and welfare of people and animals, improve the working and living environment, enrich society and culture and promote equity.

Tilly coordinates the Food Co-op project at Sustain, building on previous work to create the largest network of community food co-ops and food buying groups across the UK; her main focus is working in partnership with the National Union of Students to train and mentor students setting up new food co-ops and food preserving enterprises.