The outlines of an alternative localised food system are becoming clearer in towns and cities across the UK, slowly. So, Sustain’s proposed target for a 10% share of the grocery market for local food could be transformational, doubling the current market share. Martin Yarnit considers what this might mean in practical terms, and more specifically for the UK’s sixth biggest city, in Sheffield. 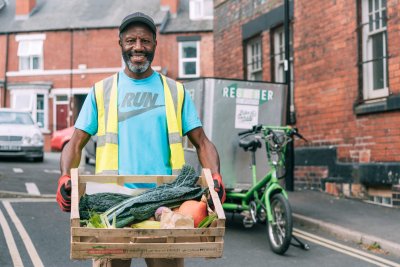 In the UK, 96.1% of groceries are sold through the top nine multiples and Ocado, leaving barely 4% for the alternative routes to market. A recent survey in England and Wales suggests that many farmers would dearly love to swap their supermarket contracts for a more direct relationship with consumers. Only 5% wanted to supply supermarkets. Most would prefer to diversify towards alternative markets, including food hubs, direct sales, independent retailers and caterers.1

The characteristics of the alternative system are: shorter supply chains drawing on localised production and distribution, diversity of producers and outlets, better returns for farmers and offering ‘all people – no matter where they live – access to safe, healthy and affordable food with the knowledge that it is restoring, not depleting, nature’.2 Hence the notion of farmer-focused food chains.

Whether the local or alternative food system can play a significant role in re-shaping our food system depends on two related issues: scale and influence.

Local food is intrinsically a labour intensive sector - good for employment – but also typically small scale. The estimated total value of a year’s effort by London’s community food growers amounted to £1.4m. While production is not often the primary focus of these groups, it does illustrate that there can be a lot of work for a modest outcome which demonstrates the nature of the challenge.3 To make matters worse, if growing to sell, too often returns are hampered by fragmentation and low investment.

So what would it take to achieve that 10% target? The average annual household grocery bill in 2019 was, according to ONS, £3312. Converting this in terms of one city – Sheffield – with 229,928 households at the time of the 2011 Census, that is a total city spend of £761,521,636. If we assume a 10% grocery share for local food, that amounts to £76m+.4 Estimates would put the annual turnover of a Tesco Extra hypermarket, like the ones in Sheffield, at around the £70m. mark, which puts into perspective the scale of the challenge for local food, and also perhaps the opportunity.5 One model for a city like Sheffield could be a very large warehouse acting as an aggregation and distribution hub linked to a network of outlets including conventional shops and social supermarkets as well as food box networks.

So it would build on the existing rich undergrowth. Social enterprises like Regather and Food Works, growing, processing and distributing food locally, veg box schemes, dairies such as Our Cow Molly, bakeries including Seven Hills and Forge Bakery, and a growing network of community plots and farms. All this is waiting to be brought together in the local food ecosystem advocated by Duncan Catchpole, with a connected progressive retail system.

To make that happen would require a sustained push by a coalition of producers, social enterprises, private investors, government agencies and trusts. That approach in the US has brought about a thriving national network of more than 200 food hubs, many of them with multi-million dollar turnovers, and crucially underpinned by local procurement through schools, hospitals and the hospitality sector.6 So, how could the forthcoming Food White Paper help to strengthen local food’s influence in the UK food system?

For a start, it should endorse the £1bn innovation fund proposed in the National Food Strategy, and a more explicit role for the forthcoming UK Shared Prosperity Fund to support local food systems. Concerted investment by government, mayoral combined authorities and local authorities could create local networks of food hubs and food outlets, backed by a strengthening of the rules governing public procurement, with a comprehensive range of facilities including local abbatoirs and business incubators, as well as the funding farmers say they need to move from supermarket contracts to selling through food hubs.7

The 10% target could prove a tipping point, intensifying the pressure on the supermarket system to reform. With serious investment and as part of a new Government food strategy, farmer focused food chains and food hubs could begin to provide an attractive viable alternative to the established system. It wouldn’t be the first time a commercial goliath had been toppled. Remember when watching a film at home meant a trip to Blockbuster, once a global presence. Then along came Netflix.

1 Bella Driessen (2021) The Value of Food Hubs: Farmers’ Perspectives, Food Research Collaboration
2 Sustain/RSPB (2021) The Case for Local Food
3 Good to Grow 2021 Report by Sustain (building on Harvest-ometer data). https://www.sustainweb.org/resources/files/Spring%20to%20Action%20Webinar%20presentation.pdf
4 The 10% target is advanced in Sustain/RSPB (2021) The Case for Local Food
5 Tesco doesn’t release detailed per store data but assuming sales of £985 per square foot and the   mean size of Extra stores to be  c. 70,000 square feet that equates to just under £70m. See: https://en.wikipedia.org/wiki/Tesco#:~:text=The%20largest%20shop%20in%20England%20by%20floor%20space,site%20as%20the%20town%27s%20new%20rugby%20league%20stadium.
https://www.insider-trends.com/how-these-15-retailers-achieved-some-of-the-uks-highest-sales-per-square-foot/
6 See:  Martin Yarnit (2019) Towards a Food Revolution: Food hubs and Cooperatives in the US and Italy, Winston Churchill Memorial Trust;  also Paola Guzman and Christian Reynolds (2019) Food Hubs in the UK: Where are we  and what next? Food Policy Discussion Paper,  Centre for Food Policy.

Martin Yarnit is a freelance writer and researcher interested in local food initiatives and bottom up democracy. He studied support for small producers in Italy and the US in 2019 on a Winston Churchill Memorial Trust funded visit. He played a central role in creating a cooperatively owned and run village shop and local food centre in Herefordshire. He is the author of the e-book, Foodlovers' Bologna.