Finding hope in cash first approaches at the bleakest of times

Cash first referral leaflets co-produced by Sustain member the Independent Food Aid Network and its partners are examples of practical responses to supporting people during difficult times and reducing the need for emergency food aid. 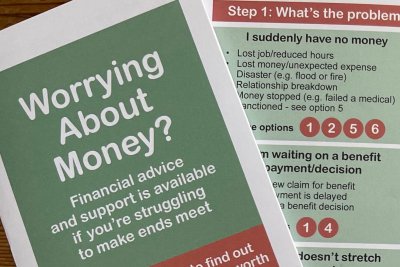 At IFAN’s recent AGM, it was evident that poverty levels are rising yet further and the need for charitable food aid is growing rapidly as a result. Representatives of member organisations voiced their deep concern about what was to come as more and more people face desperate times. However, against the odds, there was still a strong sense of optimism and solidarity in the virtual room. Especially so when we heard from member representatives as well as local partners about the collaborative ‘cash first’ work we’ve been doing in local authorities across the UK.

'Worrying About Money?' cash first referral leaflets are co-produced as straightforward resources for people facing financial crisis, and any support workers, to quickly see available advice and cash first support options and which local agencies are best placed to help. The design of the leaflet is based on learning from Scotland’s A Menu for Change project and involves a step-by-step layout that helps people navigate a way to the most appropriate support.

Since June 2020, IFAN has collaborated with local stakeholders to publish leaflets for over 60 local authorities in Scotland, England, and Wales. We’re currently working to co-develop leaflets in many more areas. Our partners typically include local authority teams, advice providers such as Citizens Advice, local food aid networks, individual food banks and other third sector organisations. The 'Worrying About Money?' leaflets are published online, printed copies disseminated as widely as possible and digital versions produced. Depending on the needs of individual communities we’ve also produced translated versions of the leaflets. We’ve co-run virtual launch events targeting agencies normally referring into food banks, and thanks to the invaluable work of the Highland stakeholder group, training sessions linked to the leaflet have been co-developed.

The aim of every local cash first referral leaflet partnership is to reduce the need for charitable food aid and ensure that anyone facing money worries or financial crisis will know that cash first advice and support is available locally. We’ve worked collaboratively with local partner organisations to put together leaflets and check every detail is correct. So that the resource reaches as many people as possible, and crucially before someone reaches crisis point, leaflets have been distributed to venues across communities including schools, GP surgeries and libraries. And we’ve also joined forces to engage agencies normally referring into a food bank about the availability of the resource and how it can be used.

Action and impact from around the country

In Shropshire, we worked with the Shropshire Food Poverty Alliance to co-produce Shropshire’s ‘Worrying About Money’ leaflet and its Coordinator Sophie Padgett has gone on to lead Money Counts training sessions to extend the reach of the leaflet. More than 10,000 copies of the leaflet have been distributed across the county and you can read more about all this here.

In Cornwall, we worked with Transformation Cornwall, the Trussell Trust, Cornwall Council, and Cornwall Citizen’s Advice to produce the Cornwall ‘Worrying About Money? leaflet that’s been printed over 16,000 times. Emma Greenwood, Trussell Trust area manager for the southwest, has written about the ripple effect of the leaflet here. Over one hundred frontline workers have now attended ‘Money Counts’ training sessions and are armed with local advice and cash first knowledge, and ways to share it.

In Argyll and Bute, the co-development of the local ‘Worrying About Money?’ leaflet has led to the distribution of hundreds of copies of the resource across the local authority; and it has been part of conversations around the need for a cash first approach to food insecurity and the use of the Flexible Food Fund from the Scottish Government to distribute direct cash payments alongside advice and support.

In Dudley we’ve worked with Jen Coleman of the Black Country Foodbank to co-produce a local leaflet, the first of three being planned, that’s enabled multiple conversations on a cash first approach to food insecurity that as Jen says “we hadn’t expected to have”. The leaflet has been distributed to every primary school in Dudley and the feedback has been very positive in terms of how useful and helpful the resource is.

In Glasgow, leaflets have been distributed to over 80 agencies across the city with the help of Community Transport Glasgow and have been translated into Arabic, Polish, Romanian, Urdu, Farsi, and Slovakian. We worked with the Glasgow Community Food Network, the Trussell Trust, the Glasgow Advice and Information Network and CPAG Scotland among others. The recently published Glasgow City Food Plan refers to the ‘Worrying About Money?’ leaflets in terms of prioritising a cash first/advice first approach.

In Wandsworth, we’ve worked with stakeholders to put together the Wandsworth ‘Worrying About Money?’ leaflet that has gone out to local pharmacies, schools, charity shops, dentists and doctors’ surgeries as a way to support early intervention. Earlsfield Foodbank manager Charlotte White told us how useful the leaflet has been, particularly in supporting people who are experiencing financial crisis for the first time to navigate ways to access support.

In Kensington and Chelsea, we collaborated with Smart, a mental health charity, that worked with local authority teams to co-produce the local ‘Worrying About Money?’ leaflet. This joint working enabled conversations around the importance of a cash first approach to food insecurity and played its part in the consideration of cash payments to be distributed by the local authority.

In Swansea, we’ve worked alongside The Children’s Society’s Coordinated Community Support programme and multiple stakeholders including Swansea Council and Citizen’s Advice Swansea Neath Port Talbot to co-produce a first ‘Worrying About Money?’ leaflet for Wales. Its publication was swiftly followed by the co-production of the Neath Port Talbot ‘Worrying About Money?’ in collaboration with the Neath Port Talbot council, IFAN member the Pontardawe Pantry Foodbank, CPAG and Citizen’s Advice Swansea Neath Port Talbot. Both leaflets have also been published in Welsh. We’re about to publish a further leaflet alongside the Coordinated Community Support team for Tower Hamlets.

For many areas, local authority teams, particularly those working on public health issues, have initiated the work to co-produce local cash first referral leaflets with IFAN. In other areas, food poverty alliances have taken the lead to co-develop their local leaflet including the Lancaster District Food Poverty Alliance, the Leeds Food Aid Network, Feeding Bristol, the Plymouth Food Aid Network, and the Brent Food Aid Network. In Birmingham, Cheshire East, Stroud and Cotswold, Trussell Trust area managers have played key roles in collaborative work to put local leaflets together. And we’ve joined forces with the Trussell Trust Epsom and Ewell Foodbank to co-produce three leaflets for the Surrey area.

Local authorities will often fund the printing and distribution of the hard copies of the leaflets in England and Wales. In Scotland, the Scottish Government supports our work to co-develop, publish, and disseminate ‘Worrying About Money?’ leaflets. And, again thanks to Scottish Government funding, we were able to commission ScotCen to evaluate the impact of the leaflet in Glasgow, West Lothian, Argyll and Bute and Highland. Scotcen’s positive report was published in November 2021.

Much more than a leaflet

Behind each and every local ‘Worrying About Money?’ leaflet, there’s a different story to tell giving us reason to hope for a better future; a future that’s built from local momentum driving systemic change upstream. Now, more than ever, we need to work collaboratively towards long-term cash first solutions that ensure that all of us can afford food whether we’re in work or not. The ‘Worrying About Money?’ cash first referral leaflet is proving time and time again that it’s an invaluable tool to help do just that.