A glass of orange juice can use up 1000 glasses of irrigation water, 22 glasses of processing water and 2 glasses of diesel. We need plenty of fruit in our diet but we don't need to destroy the environment in the process. The report also finds evidence of child labour in the orange picking industry in Brazil and Mexico and worrying levels of pesticide residues on crops. The alternatives, such as fairtrade and organic, are also analysed.

The impact of the production and consumption of oranges and orange 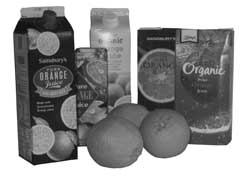 juice on people and the environment (2000)