Publications / Save Our Antibiotics

Published by the Alliance to Save Our Antibiotics, this report sets out the powerful case to show that profligate farm antibiotic use can no longer be afforded. Just under half of all antibiotics used in the UK are given to farm animals, contributing to the alarming rise in antibiotic resistance that could see a return to the days when minor injuries and routine surgical procedures in human beings were fatal.

In April 2014, the World Health Organisation (WHO) published a report about rising antibiotic resistance around the globe, in which it said that a post-antibiotic era is not an apocalyptic fantasy, but a real possibility for the 21st century. The WHO warns that resistance is becoming a problem so serious that it threatens the achievements of modern medicine.

“Antimicrobial resistance poses a catastrophic threat. If we don’t act now, any one of us could go into hospital in 20 years for minor surgery and die because of an ordinary infection that can’t be treated by antibiotics”
UK Chief Medical Officer, Professor Dame Sally Davies, 2014

Minor injuries, routine surgical procedures and natural processes such as childbirth are set to kill us again, or cause protracted illness. Antibiotic resistance is developing faster than new antibiotics are being developed, and finding new antibiotics is becoming increasingly difficult and expensive.

In livestock production, especially pigs and poultry, many antibiotics are used routinely for disease prevention or for the treatment of avoidable outbreaks of disease. This is because in intensive production, typically thousands of the animals are kept together indoors, in confined spaces, on their own faeces, where disease outbreaks are inevitable. Farmers are even permitted to use antibiotics which are critically important in human medicine (CIAs) on animals, and this use is actually increasing.

It is estimated that just under half the total of all antibiotics used in the UK are given to farm animals. The overall weight of scientific research has led to a consensus amongst many scientists that:

Published by the Alliance to Save Our Antibiotics, this report sets out the powerful case to support our conclusion that profligate farm antibiotic use can no longer be afforded.

The Alliance to Save Our Antibiotics is supported by health, medical, environmental and animal welfare groups working to stop the over-use of antibiotics in animal farming. The alliance is coordinated by Compassion in World Farming, the Soil Association and Sustain. Our vision is a world in which human and animal health and well-being are protected by food and farming systems that do not rely routinely on antibiotics and related drugs. 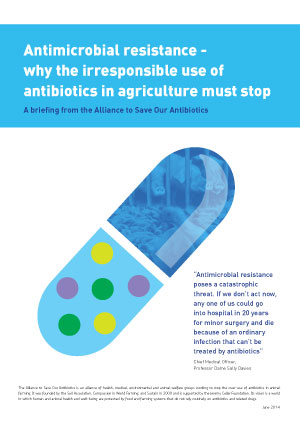