The Coca Cola Christmas Trucks kick off their UK tour in Spitalfields, London, and Children's Food Campaign's 'tooth fairies' will be back to give it a special 'tooth-friendly' send off. Health campaigners will be handing out toothbrushes to families and commuters close to the Bishops Square Coca Cola Truck location on 17 November from 5.30pm, and calling for the company to end its war against the Government’s Childhood Obesity Plan. 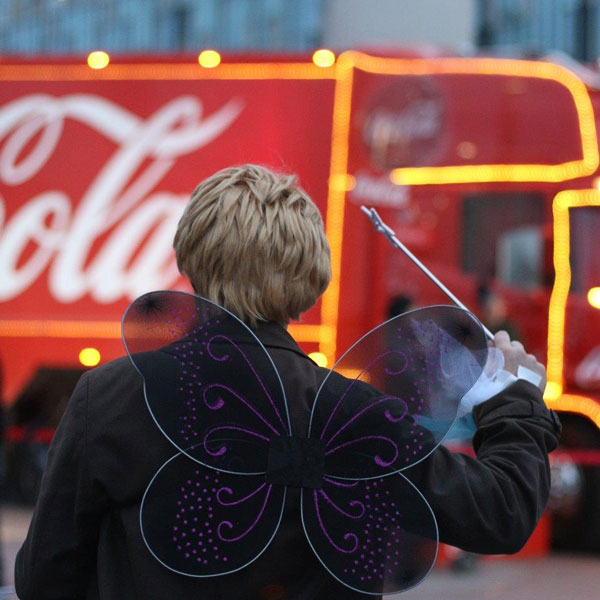 "The chutzpah of Coca Cola pretending in the run-up to Christmas that it is family-friendly gets ever more staggering. This is a company which is currently fronting an aggressive and well-funded lobbying effort to try to stop the Government from implementing the Soft Drinks Industry Levy – a key part of the Childhood Obesity Plan. This is a company which has so far ruled out reducing the sugar in its most popular drink. Neither does it follow Public Health England advice on encouraging children to drink more water, milk and sugar-free drinks.”

“Coca Cola could have chosen to leave their full-sugar Coke back in the warehouse. They could have chosen to hand out their bottled water and juice brands during the Truck Tour. Instead, they choose to continue with their sugary business as normal, whilst childhood obesity rates increase and the cost to taxpayers of treating dental decay and type 2 diabetes soars.”

“Local authorities are key players in public health efforts. Thankfully, there's a new tool in a Council's arsenal for standing up to the likes of Coca Cola and protecting residents’ health. The Local Government Declaration on Sugar Reduction and Healthier Food – officially launched in London this week – encourages Councils to develop policy on tackling junk food advertising, sponsorship and giveaways, including at events on Council-owned land. It also encourages them to influence what happens in other public spaces outside their direct control.”

“So if Councils are looking at what steps they can take to avoid their good work on health promotion being undone, they should sign the Declaration and help lead the way on local action to a healthier future.”

The Can the Tax lobby group has spent several hundred thousand pounds since September attempting to get the Government to reverse its decision to go ahead with the Soft Drinks Industry Levy. The levy was one of the few policies in the Government’s Childhood Obesity Plan to escape being watered down or removed entirely.

The ‘tooth fairies’ first donned wings and wands this time last year to take the sugar reduction message to families visiting the Coca Cola Truck at the 02 in Greenwich.

Their most recent outing was at the Labour Party Conference, in Liverpool, where they handed toothbrushes to delegates and highlighted the absurdity of the British Soft Drinks Association’s sponsorship of a fringe meeting on tackling childhood obesity.

Children’s Food Campaign aims to improve children and young people's health by campaigning for policy changes in our schools, in our communities and throughout our society that would promote healthy and sustainable food environments. The Children's Food Campaign is supported by over 100 UK-wide and national organisations, including public health professional bodies, trade unions, school food experts, children’s charities and environmental groups. We are a campaign of the charity Sustain: the alliance for better food and farming.

The Good Food for London 2016 report was published by London Food Link and Sustain on 15 November. It measures the progress of London’s boroughs and encourages local councils to take action on good food.

The Local Government Declaration on Sugar Reduction and Healthier Food is an initiative co-ordinated by Sustain to help London (and hopefully wider) local authorities tackle sugar and the proliferation and marketing of unhealthy food and drinks.

The Children's Food Campaign is also a member of the Obesity Health Alliance (OHA) - a coalition of over 30 organisations committed to share expertise and support Government to tackle the issue of overweight and obesity in the UK.