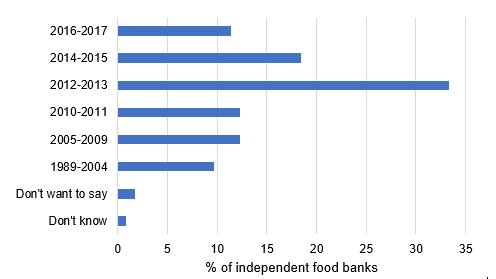 The survey was carried out between September 2018 and May 2019 and gathered information on how food banks operated and the challenges they faced. The study was led by Dr Rachel Loopstra at King’s College London and carried out in partnership with the Independent Food Aid Network, a Sustain alliance member organisation.

The researchers found that 75% of independent food banks had opened in the last 9 years; almost 40% of them did not require a third-party referral; and 44% imposed no restrictions on the number of times people could access emergency food parcels. Nearly half of the food banks were able to deliver food parcels to clients' homes and 45% of the independent food banks distributed more than the standard three days' worth of food per person.

As the Trussell Trust network of foodbanks has also found, most independent food banks reported that people who were unemployed or unable to work due to disability and single-parent families were groups often needing help from their food banks.

Sustain works with alliance members and partners, including the Independent Food Aid Network, to tackle the root causes of food poverty. Find out more.