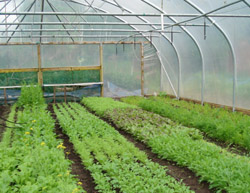 Avon Organic Group
A community group based in Bristol made up expert growers and local supporters of organic food.  The group hold a regular stall at the local farmers' market where they collectively sell their own produce. The stall generates a signifigant weekly income for some members of the group and is a way to deal with gluts of produce: http://www.avonorganicgroup.org.uk/

Diggin it
This food growing training site in Plymouth generates its own income through the sale of their own produce in their own shop. http://www.digginit.org.uk/

Ecoworks
Based in Nottingham, this food growing site trains and provides opportunities for those with learning difficulties and other vulnerable groups. They operate their own box scheme made up of 90% of their own produce in high season and also supply their own café. They sell fresh affordable food to the local community and are creating employment opportunities.
http://www.ecoworks.org.uk/

Fir Tree Community Growers
This project trains unemployed and vulnerable people in Merseyside. They also operate their own organic market garden producing around 10 tonnes of organic vegetables which are sold to low-income groups locally or through an organic shop in Liverpool: http://www.climatefriendlyfood.org.uk/fir_tree_farm

Food From the Sky
Based in North London, a unique relationship has been forged with a local supermarket Thornton's Budgens creating a community food growing site on their roof top. The site provides fresh produce for sale in the supermarket: http://foodfromthesky.org.uk/

Fork and Dig it
This community-led project is based on the edge of Brighton and sell fresh produce to a number of shops and outlets in the city: http://www.bhfood.org.uk/links.php

Grow Sheffield
The Abundance project, which is part of Grow Sheffield, is a community group that harvest surplus fruit from the city and redistribute it free of charge. They have recently launched their own line of chutneys to raise funds to pay for costs relating to the group's activities: http://www.growsheffield.com/pages/groShefAbund.html 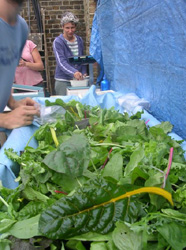 Growing Communities
Pioneering and successful community-led box scheme in Hackney, which sells produce from local organic farmers, runs a farmers' market, and also operates a number of commerical growing sites in East London which are being developed into an urban patchwork farm managed by a network of apprentice growers who receive an income from the food they grow: http://www.growingcommunities.org/. Growing Communities has also recently launched a start-up support programme to help other communities achieve similar success: http://www.growingcommunities.org/start-ups/

Heeley City Farm
Based in Sheffield, this city farm offers food growing training to a wide number of people in the community. They have the Wortley Hall Organic Garden where a wide range of produce is grown. They sell produce in a number of outlets in Sheffield to contribute towards the costs of staff time and materials for the site: http://wortleyheritage.org.uk/

Nourish Community CIC
Nourish are a social enterprise that run a community farm and café based in Brighton. They coordinate volunteers to grow the produce and provide training in food growing. Their produce is purchased and used by the 20/20 café: http://www.nourishcic.co.uk/index.html

OrganicLea
A workers' co-operative in Walthamstow. They run a scheme called “Crop Share” which creates an outlet for the sale of local allotment and home-grown produce. They have recently expanded their growing capacity by taking on the Hawkwood site in Chingford. with several outdoor growing areas and a large greenhouse. Here they are planning to scale up their commercial growing targeting outlets such as restaurants, shops and supplying their own box scheme and café: http://www.organiclea.org.uk/

Wenlock Herb Garden
A community-led commercial venture that grows and sells speciality herbs and salads which they distribute locally by bike and earn income through sales to a range of local outlets, see: https://sites.google.com/site/thegrassshootscollective/the-grass-shoots-collective/the-growing-kitchen-garden/the-wenlock-herb-garden