The whole world's seeds in our hands 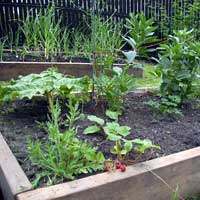 Tom Moggach learns about a new research project which is cataloguing the more unusual fruit and vegetables being grown up and down the country.

It’s easy to forget one of the best bits about Britain - our unrivalled sense of culinary adventure. We boast a ferocious appetite for new foods and flavours, fuelled by our richly diverse population and far-flung history. But while supermarkets import exotic ingredients, and television chefs inspire with global recipes, one aspect is often overlooked - the people growing unusual fruit and vegetables on our doorsteps.

Dudi squashes, yard long beans, shark fin melon, water chestnuts, callaloo and fresh chickpeas are just a few of the crops that are being grown successfully in Britain.  An exciting research project, Sowing New Seeds, is cataloguing these crops as part of a three-year initiative funded by Big Lottery Local Food Fund and The Brook Trust.

“It feels like Anton and I have visited every allotment in the Midlands,” chuckles Sally Cunningham from charity Garden Organic, who co-ordinates the project with colleague Anton Rosenfeld.

Over the last year the team, with the help of academic researcher Samantha Dobbie, have interviewed around 100 growers. They have investigated the range of crops that they grow, noting details, taking photos, collecting seeds and later trialling more than 50 crops back at charity’s headquarters at Ryton Gardens, near Coventry. In October an exotic crop fair celebrated their first year’s work, with nearly 180 growers visiting to share growing tips, seed and cuttings.

Sally is passionate about the importance of horticulture in Britain: “Things that are delivered via airfreight will not get any cheaper, the climate is changing and we have to see how many things are grown as humanly possible. We really are in a golden age – I’ve looked at seed catalogues from all over the world – and we have more things available to be grown than almost anywhere else. We’ve got access to the whole world's seeds."

In many cases, Sally has discovered, the seed saved by the growers is far superior to the cultivars and varieties commercially available – perhaps because they are better adapted to our climate. Moreover, it is often people over 70 years old who grow these crops, so their skills and knowledge is particularly precious.

Future plans for the project include building up seed stocks and recruiting and training seed stewards to disseminate information and encourage other people to grow these crops.

Here are some ideas to try at home:

Amaranth / Calalloo
Similar to spinach, explains Anton, who prefers the texture of this leafy crop. Sow in a patch or in rows outside once the soil has warmed up, typically mid May, and repeat in June and July.  “It does need sun,” adds Sally. ”To do really well, it needs a rich soil. It’s a useful thing to put in once the spuds have come out.” Cook as you would spinach.

Lemongrass
Select a fresh bunch from the supermarket or Asian grocer. Shave off the bottom few millimetres of root, then plant upright, a few inches apart, in a free-draining, gritty compost.  A month later, give the stems a gentle tug to check that the roots are established. If so, move outside or pot on into containers.  Harvest in August, leaving a few stalks to overwinter. Excellent in Thai soups and curries or steeped for tea.

Coriander
Sow seed direct into the soil or containers every three weeks from April to September. Keep the soil or compost moist. To save money, use unwashed coriander seed from the supermarket. Coriander has a tendency to bolt in hot weather.

Chickpeas
Sally advises to grow them as a luxury vegetable, for the fresh peas rather than the dried pulse: “Think of them as a treat – like mangetout”. Soak and sow chickpeas from the shops, sowing in the same manner as peas. They prefer a dry stony soil, not clay.

Fenugreek
Often sold in Asian shops as methi, the Gujarati name for this popular plant. Sow direct, in a similar way to spinach, between April and August, and harvest the young leaves. Fenugreek prefers a free-draining soil, but is generally not too fussy. “I prefer to half wilt it and use in quite large quantities, like parsley or coriander – a good handful per serving,” says Sally.

To find out more and to get involved please call Garden Organic on 02476 217738, or email sowingnewseeds@gardenorganic.og.uk.