This two-year project aimed to increase the proportion of local and/or organic food to 10% of the catering provision of four London NHS hospitals: 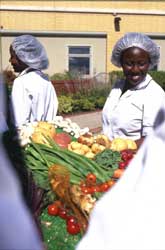 The NHS spends around Ł500 million on food to serve 300 million meals in 1,200 hospitals every year. And while no one is expecting Gordon Ramsay to do the cooking, when you've had to book your place six months in advance, whether at a restaurant or a hospital, you would think you could at least get a decent meal when you show up! At least some Londoners did, because of a two-year London Food Link project. Working in partnership with the Soil Association, the project tried to increase the proportion of locally produced, nutritious food served in London hospitals.

The project evolved after initial encouraging research in 2002 and 2003 by the Soil Association, in conjunction with the Foundation for Local Food Initiatives, on the feasibility of adapting catering procedures in St George's Hospital, Tooting, to include organic food. Funding for the project was secured from the Department of Environment, Food and Rural Affairs (Defra) under the Rural Enterprise Scheme, and also from the King's Fund.

In England, the Government's Strategy for Sustainable Farming and Food, resulting from the "Curry Report", aims to secure a sustainable future for our farming and food industries, through achieving improvements in:

By adopting sustainable procurement, the NHS, a key organisation in the public sector, has the potential not only to contribute to sustainable development, but also to imrprove health. Through its role as an employer, a purchaser, and a major owner of land and property, the NHS can work to ensure its policies improve the nation's well-being through minimising environmental harm and supporting local economies. These policies are consistent with the health promotion aims of the NHS.

The project aimed to increase the amount of local and/or organic food served in four London NHS hospitals to 10% of their routine catering provision. This should help to support local communities by keeping money and jobs in the local food and farming sectors, and to raise awareness about food and farming among patients, staff and visitors to the hospitals.

The benefits of sustainable food include:

Local economic development
Localised food systems encourage food supply and processing as close to the consumer as possible, instead of simply where it is cheapest or where legislation is weakest, resulting in a fairer, more ethical food supply chain. By purchasing local food we can help support our farmers and local communities, keeping money and jobs in our local areas.

The benefits to local economies and communities include:

Public sector bodies, such as the hospitals participating in the project, have opportunities to ensure that local suppliers are not discriminated against, and thereby help support local economic development.

Shorter supply chains also have the potential to provide fresher and more nutritious food, as produce has not been stored for long periods or travelled large distances. For example, the vitamin C content of fruits and vegetables starts to decline immediately after harvest.

Public sector bodies, through the food that they provide, can have a direct effect on people's health and well-being. More sustainable food and catering practices in the public sector could improve the nutritional quality of meals, reduce the health risks from pesticide and other residues, and from pollution, and reduce diet related diseases.

Environmental protection
Food travels further and further to reach our plates. International trade in food has almost trebled in thirty years. Large volumes of some products are often simultaneously imported and exported, for example milk and lamb. The transport involved in food related commodities results in millions of tonnes of carbon dioxide pollution, which contributes to the serious problem of climate change. Through the development of locally focused food systems, including through the public sector, food miles and the associated carbon dioxide pollution could be significantly reduced.

More sustainable farming systems, such as free range or organic have been shown to encourage much greater biodiversity in comparison to conventional systems. They also protect natural resources such as soil, nutrients, water and air and promote higher animal welfare standards.  Conventional agriculture, on the other hand, may have significant external costs, such as the millions of pounds needed to clean up drinking water as a result of pesticide pollution, and the costs of epidemics of farm animal diseases.

Supporting hospitals
In addition to smoothing the process for local producers, the project tried to make it as easy as possible for hospitals to make the leap from standard food procurement practices to more local and organic producers. As part of this process we worked with the hospitals to facilitate a workable local supply chain. We helped hospital catering crews develop menus that favour seasonal, local food and we also assisted with the process of setting supply tenders that improve the chances of a success for local and/or organic suppliers.

Investigation and analysis
The programme also:

Ealing Hospital and St George's Hospital, Tooting. Because of their relatively large sizes and the nature of their catering operations, these hospitals focused on providing local and/or organic food in their canteen areas.

The Royal Brompton Hospital and the Bethlem Royal Hospital. As these two have smaller patient numbers, they offered local and/or organic food in both canteen and ward catering.

For details of the results of the project please see the 'Getting more sustainable food into Londons hospitals: Can it be done? And is it worth it?' report in the Sustain publications catalogue.

The above text contains excerpts from the publication: Good Food on the Public Plate - A manual for sustainability in public sector food and catering, Sept 2003, Sustain and East Anglia Food Link. For further information and ordering,see our publications page.