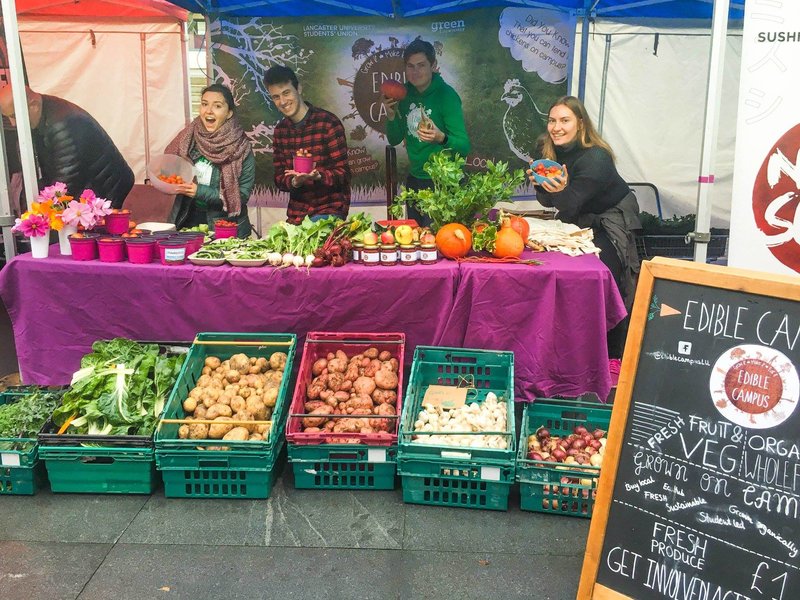 Edible Campus is Lancaster University’s sustainability-championing student society. The Co-op harvest vegetables from their EcoHub (where they also raise a flock of rescue hens!) and run a stall at the local farmers’ market. The EcoHub has a polytunnel, raised beds and a wildlife pond, and provides a space for students to learn about the importance of a healthy food system as well as showcasing best sustainability practices in food production and consumption.

They’ve been very busy running the Co-op stalls at the weekly farmers’ market, selling campus-grown veg, bread and wholefoods. A greenhouse is in the final stages of construction, which will allow the students to start the growing season earlier in the year as well as give high value crops like tomatoes and chillies a longer season. Twice-weekly ‘action days’ continue to be incredibly popular among the students, and the EcuHub has added six new growing beds to keep up with demand!

The EcoHub has also purchased a Ridan composter that will be used to process up to 400 litres of campus food waste per week, and have partnered with no-dig champion Charles Dowding offering members of the Co-op online training to improve their organic growing skills.

Students involved with Edible Campus also run a food preserving enterprise, making jam and chutneys for sale at the market stall throughout term. The preserves are made using produce grown on campus, and Edible Campus Preserves run workshops for other students interested to learn.

Food co-ops: Building a network of community food co-ops and food buying groups across the UK to help new groups get off the ground and existing groups to thrive.