The project: The Eat Somerset project ran from June 2006 to March 2009. Coordinated by Sustain, the project was funded in its first phase (to June 2008) by a charitable grant from the Esmée Fairbairn Foundation, with additional support from Friends of the Earth. The aim of the first phase was to develop trading links and new markets for local food producers, supporting 15 supplier businesses, and increasing the range of local produce available in six shops. The first phase of the project also involved Somerset Food Links, a not-for-profit organisation working to promote greater use of sustainable food. This series of Case Studies provides information on how the project developed, successes achieved and challenges faced in the first phase of the project.

Over the course of working with local food producers it became clear that many of them needed some support in making new contacts with local buyers from a range of sectors including retail, wholesale, catering and public sector catering. This is partly because, as busy producers, they do not have the time to market themselves and meet with lots of individual buyers. Some of them also told us that the lacked the skills or confidence to do so.

In order to address this, the project decided to hold a first Meet the Buyers event in July 2007, followed by another in April 2008. These are a way of introducing producers directly to buyers. Producers have stalls displaying their produce and buyers are invited to come and look around and talk to the producers directly.

A total of 23 producers attended the event. Four others had confirmed but could not make it at the last minute. Around 19 buyers attended in total. The event was held in the open but under cover in the afternoon. This made is accessible to the public who were walking through the area. This was not entirely desirable as it took away the focus of the actual event and in future it was agreed to hold such events in more private areas. However, the event was successful and fifteen producers have reported that they had made new trading links as a result of attending. However, it is not known whether these links have come to fruition and resulted in regular orders. 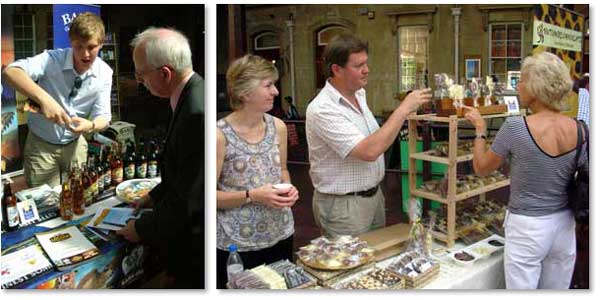 To aim to get a greater range of buyers to the event, the project officer enlisted the support of the four local councils in the area (Bristol, Bath & North East Somerset, South Gloucestershire and North Somerset). Each of these took on responsibility for mailing information to food premises within their area. This event was attended by 24 producers and over 50 buyers came to see the local produce available ranging from wines, beers and fish, to flour, ice-cream, yogurt, jams, cheeses, eggs, bread and apple juice. Four producers had to pull out at the last minute because of work demands, and 10 buyers who had registered did not turn up on the day.

However, the day was successful. Some orders were placed immediately on the day. It is known that 16 orders have since been placed and 27 new trading links are being pursued as a direct result of holding this event.

Our thanks for the additional support we received to run this event go to Bristol City Council and South West Food & Drink. In addition, Environmental Health Officers from South Gloucestershire Council attended to offer advice. Feedback forms showed that this was welcomed by participants, both producers and buyers. It provided a more joined-up approach to the event in terms of working with other partners. 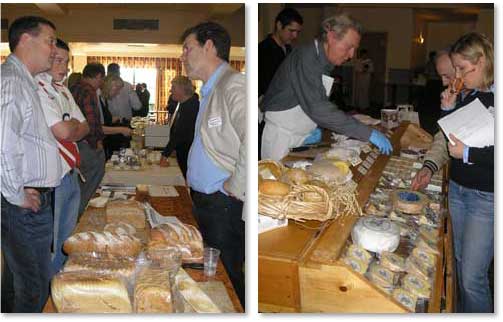 What did we provide?

At both events we provided a list of producers for the buyers. At the April event we tried to improve on what we had done before by:

What did we do on the day?

Preparation prior to the event is detailed above. One the day we:

What we have learned

Both of these events went well, and feedback from producers who attended the events showed that 56% of them need support from Eat Somerset for organising events such as Meet the Buyers. In addition, 39% need help with marketing. Of the April event:

What would we do differently?

If running similar events there are a few things that we think could be improved upon, and these are some of the improvements we would make. We would:

By focussing on specific markets and working directly with producers wanting to supply those markets we might find even more benefit from this type of event.

IN CONCLUSION: Meet the Buyers events are a particularly valuable activity for both producers and buyers. Helping to organise this for producers takes the pressure off them and provides additional support and networking opportunities. Not only were there benefits in terms of meeting buyers, but other links were made between producers at the event. Producers don't often get the opportunity to talk to each other as many work in isolation, so this type of event lends itself to establishing productive working relationships.

Eat Somerset: From 2006 to 2009 Sustain co-ordinated a food chain project in south west England that worked to increase trading between producer groups in and around Somerset and independent food retailers in the county, and create new markets in Bristol and Bath.