The Obesity Games - junk food sponsorship of the Olympic Games

The inside track on the marketing strategies of Olympic food and soft drink sponsors, and the sponsorship deals behind them.

The inside track on the marketing strategies of Olympic food and soft drink sponsors,  and the sponsorship deals behind them.

Sponsorship income is a small piece of the Olympic funding pie, but exerts a disproportionate influence on the Games and on children’s eating habits.

The Obesity Games report reveals the Olympic-related marketing tactics of Coca-Cola, McDonald’s and Cadbury’s, and how - even before a single medal has been awarded - they were already big winners of the Games. The report also criticises the increasing emphasis these companies place on “obesity-offsetting” – funding sports equipment and exercise schemes.  This is just seeking to downplay the role diet has in obesity, rather than acknowledging that both increased activity and a healthier diet are vital.

The Obesity Games report finds that corporate sponsorship accounts for less than 10% of the total funding for the London2012 Games, and junk food sponsors contribute only around 2% of the IOC income. Yet sponsors like Coca-Cola, McDonald’s and Cadbury’s are given an unrivalled platform to promote their unhealthy brands and products.  The Children’s Food Campaign concludes that the IOC should set proper conditions on promoting healthy eating in their sponsorship deals, and that junk food brands should be excluded from sponsoring all sporting events.

2. Sponsorship income: a small piece of the funding pie

4. How the big food companies make the most of their sponsorship

a. Coca Cola’s marketing machine
Before the Games
During the Games
As Olympic Caterers
Why it matters

b. McDonald’s marketing machine
Before the Games
During the Games
As Olympic caterers
Why it matters

c. Cadbury’s marketing machine
Before the Games
During the Games
As Olympic caterers
Why it matters

5. Obesity–offsetting is not fair play

6. Catering at the Olympics 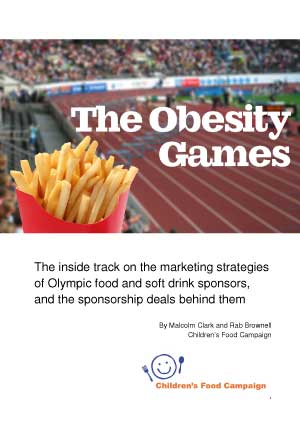