A briefing document produced by the Good Food for Our Money campaign calling for legally binding sustainability standards for seafood served in public sector institutions such as government departments, hospitals, schools, prisons and the armed forces.

In this briefing document, Sustain's Good Food for Our Money campaign called on Government to support the “Public Bodies (Procurement of Seafood) Bill”, introduced to Parliament by David Drew MP on 24 February 2010. This Bill would legally require that all seafood purchased by the public sector is proven to have come from sustainable sources.

A briefing document produced by the Good Food for Our Money campaign.

The international threat to seafood, particularly some fish species, is well-documented. There is consensus that fish stocks need careful management and a recognition that fisheries that are over-exploited can collapse suddenly and with irreversible damage. For example, a collapse of this kind occurred off the east coast of Newfoundland in 1992 when cod stocks vanished, the local industry evaporated and 40,000 people lost their jobs. Even now, the cod have not returned.

Data from the United Nations Fisheries and Aquaculture Department paints a very bleak picture for the state of our oceans. It estimates that 80% of the world’s fish stocks for which assessment information is available are reported as fully exploited or over-exploited and, thus, requiring effective and precautionary management.

The public sector is a big consumer of seafood, but it is not an ethical consumer of seafood. At the time of this briefing paper, public sector organisations were not required to meet ANY legally binding sustainability standard for the seafood that it buys. There is government guidance, but no rules. In fact, the government did not even require the public sector to meet the rules it introduced under the ‘Fish Labelling Regulations’, by which retailers must clearly label the origin and species, including the method of production, for all fish and fillets sold. Because of this, public sector organisations, often unknowingly, are buying unsustainable seafood. Some examples of this include the purchase of haddock in prison food without any assurance of its sustainability, and the serving of tiger prawns, dogfish and swordfish – which are often produced particularly unsustainably – in hospitals and to our armed forces.

This briefing paper sets out the case for legislation, to ensure that the public sector plays its role in conserving precious marine resources, and good livelihoods in fishing, for years to come.

NOTE: Since this briefing paper, and since June 2011, Government has now adopted mandatory sustainable fish standards for one third of public sector food - the food served in Central Government, prisons and some parts of the armed forces. Yet still, fish sustainability standards do not apply to two-thirds of the UK's public sector food - hospitals, schools and local authorities. 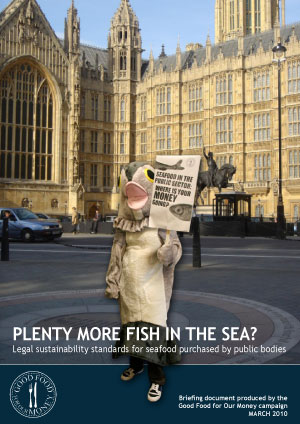 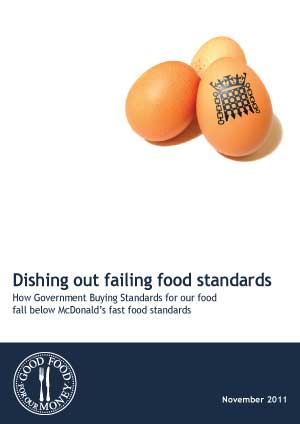 This report compares 'Government Buying Standards' (which apply to food served in government departments, parts of the military and state-funded... 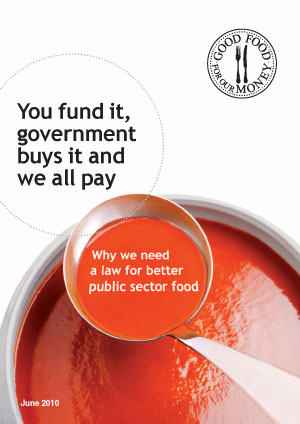 The report explains why government must introduce mandatory health, environmental, animal welfare and ethical standards for public sector food. It is...

A second, updated report analysing government spending from 2000 to 2010 that has been wasted on failed voluntary attempts to improve hospital food....

The report reveals that more than £50m of taxpayers' money has been spent by government on failed voluntary attempts to improve hospital food in the... 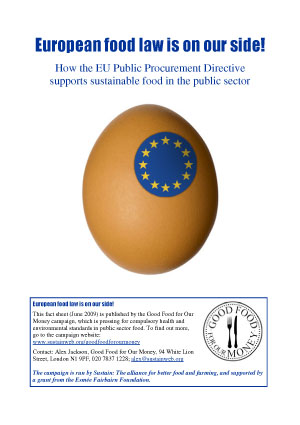 European food law is on our side! How the EU Public Procurement Directive supports sustainable food

This fact sheet is published by Good Food for Our Money, which is campaigning for compulsory health and environmental standards in public sector...

Good Food on the Public Plate: A manual for sustainability in public sector food and catering

This comprehensive 292-page manual is presented in five parts, for those wishing to introduce better quality and more sustainable food and practices...

This briefing paper - examining opportunities and issues relating to sustainable food procurement in the public sector - is one of several on themes... 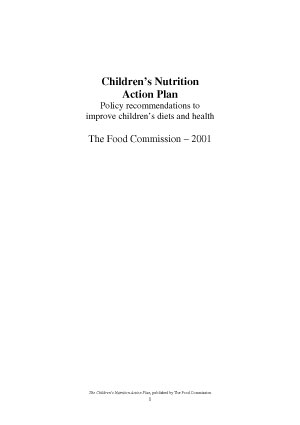 The Children's Nutrition Action Plan resulted from a roundtable seminar of children's health experts, convened in 2001 to review what policies would...