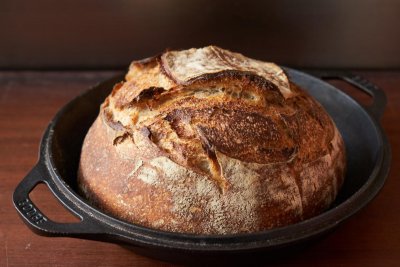 THIS EVENT HAS BEEN CANCELLED

How do we work to fix the problem that access to delicious, nutritious Real Bread tends to be an ‘us’ and ‘them’ situation, divided by socio-economic lines, including income, class, culture, colour and ethnicity?

Join filmmaker Zev Robinson at e5 Bakehouse in London for a screening of his film, Real Bread Bakers, followed by a panel discussion, audience Q&A and pizza.

What more than redistributing surplus loaves via charity/community projects can be done to make Real Bread be made affordable and accessible for people on lowest incomes?

How do we balance this with ensuring that small, local, Real Bread bakeries remain economically sustainable and that the people and products are not undervalued?

This event is intended as a conversation between farmers, bakers, millers and people who buy and eat, considering how a shift in the supply chain can come from the ground up.

To remove a financial barrier to participating in this event, there are a limited number of guestlist places available. Please email e5 Bakehouse to enquire.

Wheat is a global staple. Bread is a table companion for and from people across different contexts regardless of class, ethnic and economic background.

The expanding industrialisation of wheat production, and consequent decrease of grain prices, has made this product readily available and accessible. A cheap and satisfying source of calories.

Unfortunately, as a consequence of these processes, the quality has severely deteriorated. Many questions hang over the increasing use of chemical inputs in agricultural production, the development of hybrid seeds, the dominant flour milling and ‘refining’ processes and ‘no time’ industrial loaf fabrication.

Have these factors combined to make products that are not only less nutritious for all but also problematic for some? Is the increasing prevalence of coeliac disease, wheat allergy and gluten intolerance a warning that is not being heeded?

Such questions have prompted a growing Real Bread movement and the Real Bread Campaign. People in the movement variously practice and promote the selection of grain varieties based on not just yield and protein levels; sustainable farming practices; milling that preserves flavour and nutritional values; and long fermentation. Typically, this goes hand in hand with the central role of skilled, knowledgeable food producers, and a relocalisation that helps to strengthen communities and their economies.

Problematically, however, alternatives to commodity grain, flour and baked products tend to be unaffordable or otherwise inaccessible to people on low or no income. Real Bread has become a marker of class and economic privilege, not only for people with enough money to buy it but also for people who are able to spare time to make it.

In his film Real Bread Bakers, Zev Robinson presents us some of these key issues, and Real Bread making that aims to close the loop between the producer and the consumer by redistributing profit share and eliminating the middleman. Questions it asks include: how can a re-localised supply chain be achieved under today’s capitalist system? How do we bring people closer to the source, and how do we make better bread accessible to all?

Zev Robinson
Zev is a Canadian-British artist and filmmaker who has been making documentaries about food and related issues since 2008 as part of his art, film and food project The Art and Politics of Eating. His documentary Real Bread Bakers portrays the relationship between baking bread, nutrition, community and agriculture. @zev_robinson

Roshni Shah
Plant Futures Programme Manager at Made in Hackney, Roshni began her career in fashion but always had a love for cooking and hosting passed down from her very talented mum. After volunteering as a project leader at Foodcycle and starting her own plant-based supper club, she noticed a disconnect in values between her work and extracurricular life. So, in an effort to seek more purpose, she transitioned to the third sector through the On Purpose Programme. Since then she has worked in tech for good and various community organisations.

She is passionate about promoting equality, diversity and community building and volunteers for organisations that reflect these values; currently Newington Green Alliance, The Girls Network and the Women’s Equality Party. At Made in Hackney, Roshni has found an organisation that truly lives their values, and combines her love for plant-based food and community building. @roshpics

Sarena Shetty
Sarena is a programme designer at Participatory City Foundation working on the Every One Every Day project based in Barking and Dagenham, helping to build a fully inclusive Participatory Ecosystem in the borough.

Her role involves developing a range of inclusive participation opportunities that build capacity amongst residents by designing programmes, partnerships and support systems across the borough. Alongside this she's working to develop the concept of collaborative businesses - ways to do business that are better for both people and the planet.

Before Participatory City she was a Year Here fellow specialising in community resilience, working on projects around social isolation and loneliness, particularly for older people. She's focussed on building stronger more connected communities that leave no one behind. @ParticipatoryC

Chris Young
Chris has coordinated the Real Bread Campaign since March 2009. His work involves running the Campaign’s international supporter network, creating and running initiatives including Sourdough September, Real Bread Week, Together We Rise (therapeutic/social baking), calling for an Honest Crust Act of better loaf labelling and marketing laws, and No Loaf Lost (surplus and waste reduction), as well as the Lessons in Loaf and Bake Your Lawn programmes for schools. He’s the author of the Slow Dough: Real Bread recipe book and Knead to Know…more microbakery handbook, plus numerous bready reports, and editor of True Loaf magazine.

In 2022, Chris began work on Real Bread For All, a renewed focus on how Real Bread can be made more affordable and accessible to more people. @RealBreadCampaign