A new report recommends a range of actions to build more resilient food systems in the capital, particularly for those experiencing or at risk of food insecurity. Simon Shaw outlines the report’s key findings and recommendations. 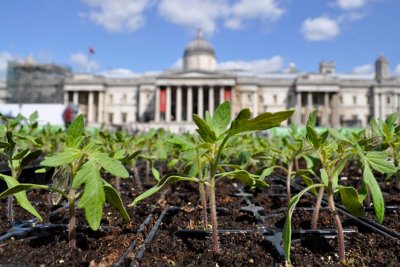 Enhancing the Resilience of London’s Food Systems, a new report from Oxford University’s Environmental Change Institute (ECI) and commissioned by the Greater London Authority (GLA), brings together a wide range of stakeholder views and recommended action to build more resilient food systems for London. Sustain also  advised on the project and supported the involvement of a panel of external stakeholders.

What is food resilience?

During the pandemic, we have increasingly been hearing, and using, the term resilience and working alongside local partners to think through how a focus on resilience may help us shape a better, fairer food system. The research process helpfully brought out a range of different perspectives on what food resilience could be. The researchers challenged us to decide the scope of the project and we decided to scope the project in this way:

Given the complex nature of the 21st century food system, the research team helped us to categorise suggested actions according to the ‘three Rs’ framework on resilience building:

“There are so many opportunities to work towards a more resilient food system in London, but this report helpfully categorises actions to help us understand the role we can play to support food producers and the supply chain within the current food system, as well as build a better and more inclusive alternative.”

The GLA has a strong track record of leadership on fostering a fairer, more sustainable food system. Crucially, the report concludes that City Hall should continue ‘to take a leadership and coordination role to bring together stakeholders, using a clear process to derive strategic, implementable recommendations.’ This ongoing leadership will require a joined-up approach from the different GLA departments, including social policy environment, health and strategy, that now lead on different aspects of food-related policy and programmes across City Hall.

“This report provides us all with a suite of actions to ensure that all Londoners can thrive as part of London’s recovery from Covid-19. We look forward to working with the Mayor and his team to build a fairer London.”

A role for London councils

Alongside the GLA’s strategic role, we do need to see concerted action from across London’s councils. Many councils have played such a powerful role to address food insecurity during the pandemic and we strongly urge councils to build resilience for the longer term. Many councils have played active roles in local food partnerships and food poverty alliances to respond to food insecurity during the pandemic; this partnership working should play a key part in a drive for greater resilience. The Boroughs Food Group, a very active forum of council officers and community organisations convened by the GLA, should also play a vital role in informing GLA action and fostering partnership working between City Hall and London boroughs.

“Sustain's forthcoming Good Food for All Londoners report will set out a number of actions for London councils and their partners to increase the resilience of London’s food system, particularly for those at most risk of food insecurity. We look forward to working with councils, food partnerships and food poverty alliances as they take action for local residents.”

A suite of actions, rather than one silver bullet

The research is clear that there is not a single silver bullet for building a more resilient food system, but it does set out a clear methodology to foster a shared understanding of food resilience and the different actions we can take to work towards it. As Londoners’ incomes are put under increasing pressure by increases to cost of living, this is an increasingly important agenda.