Round, round, baby, right round 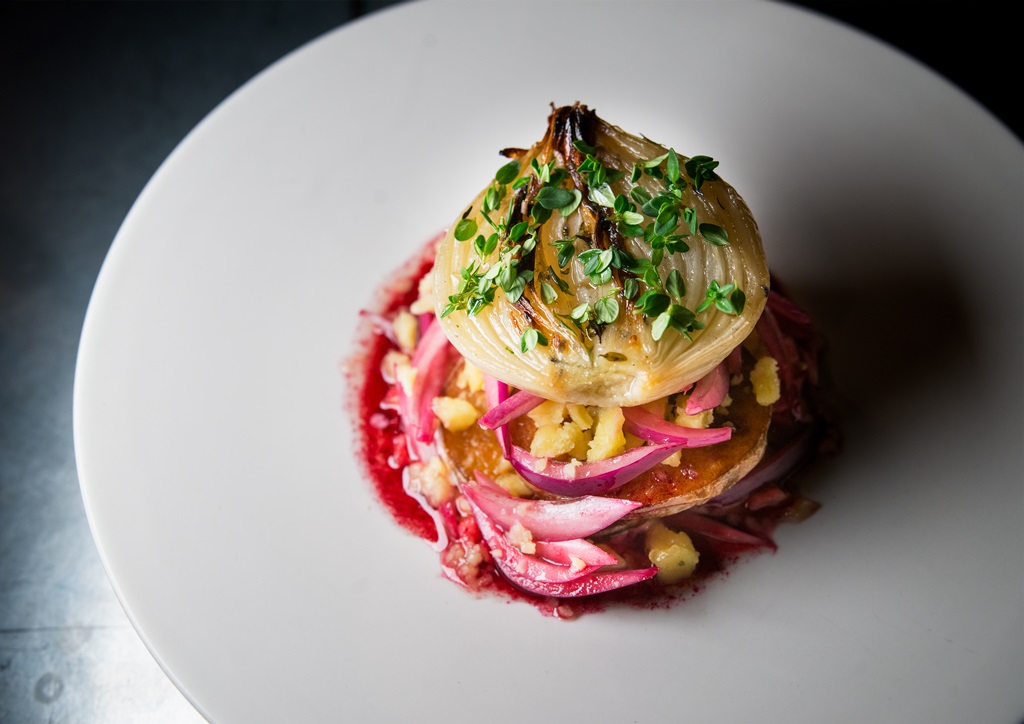 Rosie Baldwin looks at how circular thinkers are seeing food chain ‘waste’ as a resource, whether it’s in the form of coffee grounds, empty wine bottles or even onion peels.

Recently, having spoken to four chefs and the team behind Foodchain, a new restaurant supplier platform, I was able to better understand how the restaurant world is building and promoting circularity, looking at the lifecycle of each resource and how it can be used, reused and what ‘waste’ can be treated as an asset.

Since November 2017, Margaux Stepczynski and Sarah Gideon Contento had been running the kitchen at the Chelsea-based café and deli Greenspeares with a strong circular ethos. They explained that the biggest challenge has been to communicate effectively to their customers why their menu deviated from the ubiquitous avocado toast and smoked salmon options seemingly found in every other café around London.

They take a ‘root to stem’ approach and use their own ‘waste products’ within the café, for example by curing trout with spent tea leaves. Waste prevention also includes identifying ingredients that will soon go out of date, and finding ways to use them before they do.

Sarah told me that “figuring out how to make people buy into the concept without being preachy, without turning them off” is tricky. Predicting food trends and designing menus that reflect customers’ desires is challenging enough but if you’re a chef who focuses on circularity, there can be tough decisions about what you’re willing to sell.

An interesting element to the circular thinking at The Dairy in Clapham is their partnership with Full Circle Farms , a company that picks up food waste and delivers it to their farm in Sussex. There it gets processed into compost, which is used to grow produce for the restaurant. Alongside the Dairy’s sister restaurant, Sorella, they work to plan a yearly rotation of crops, paying the farmer a set monthly rate for their deliveries. The result is that the restaurants provide both food for their customers and organic matter for the farm, redefining ‘waste’ as an essential resource.

The Dairy also sets aside more time and space to create a whole range of ferments and pickles, often using ingredients that might once have been thought of as waste, or that have arrived from the farm in a glut, transforming them into delicious additions for the menu throughout the year.

For head chef Ben Rand, the menu changes he’s made in an effort to minimise waste and highlight nose-to-tail practices have been met without resistance. Ben explained that they are flexible on their menu: “We buy in whole lamb… nothing goes to waste… We’re quite happy to say ‘lamb’ on the menu [without specifying the cut] and run through a series of cuts in the evening, whether that’s rumps, racks, rolling out the leg...”

Douglas McMaster, founder of Silo, a zero-waste restaurant in Brighton, and co-founder of the new bar/restaurant Cub in Hoxton, has paved the way for circular thinking in the restaurant world. Douglas is currently looking to buy a machine that will turn the restaurant’s empty wine bottles into sand, and then having the sand transformed into crockery for the restaurant. “In future venues, I’d like to have complete self-sufficiency… I look forward to the day when Silo isn’t [seen as] radical.”

If Silo is to become the norm, more than just chefs’ practices will have to change. A restaurant is dependent on an elaborate web of farmers and other food producers, wholesalers, and more. Communication can also be a huge catalyst for growing circular practices. As Ben Rand notes, The Dairy has solved many problems through “just dealing with good people and small companies, and just chatting…” For example, talking to their mushroom supplier, Wild Room, they learned that they had been unable to find buyers for the mushrooms broken in transit. The Dairy had a dish made with chopped mushrooms, and they soon began buying the broken, but still perfectly delicious, funghi.

When I asked Margaux and Sarah how they build relationships with suppliers while also running a busy kitchen, they enthusiastically told me about Foodchain, a new platform that connects restaurants directly with farmers and producers, while providing them with transport and other logistics.

The app allows chefs and suppliers to cut down on their waste through a continually updated list of what the producers have on hand. Richard Murray, one of Foodchain’s founders, explains: “one of our core features is a discovery tool, a live feed where suppliers can push out items as specials to reduce their waste. Chefs love having one place they can access these deals, and are safe in the knowledge this isn’t an old fish or vegetable.”

Foodchain has also invested in providing better packaging to their customers and suppliers, and recently designed an insulated container that could replace the single-use polystyrene box that seafood often gets shipped in.

Although circular thinking is only a piece of sustainability, within the restaurant world it can be transformative. Products and supply chains are something businesses can take more ownership over, resulting in less waste, as well as more enthusiastic and productive engagement across the industry.