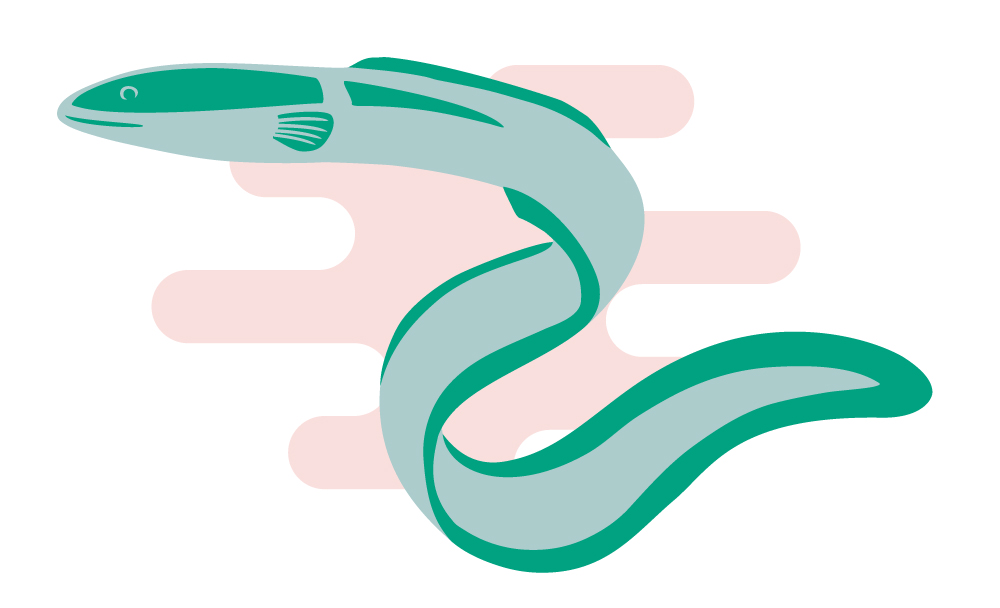 Once so popular we named our mag after it. But where have all the eels gone? Ruth Westcott and Will de Montmollin rev-eel all.

Ever wondered why we’re called The Jellied Eel? Eels have been part of Londoners’ diets for centuries – in fact they may have been part of the reason London was established in the first place. Experts think that the extraordinary abundance of eel, and other fish, in the UK’s rivers allowed Britain’s population to expand rapidly between the 7th and 10th century.  At the time, some Christian teaching prohibited eating meat from animals with 4 legs; Benedictine philosophy even held that fish were less ‘fleshy’ than other animals and so less likely to incite sexual passion.

Cheap, nutritious and a readily available food source - Jellied eels became especially popular in London in the 17th and 18th century. Fishermen set nets and eel-traps on the banks of the Thames and historical ledgers estimate that around 50 tonnes per year was imported to London - mainly from the Netherlands and Baltic region into London - during that time.

These days, the fish that provided London’s poor with affordable protein for centuries is now listed as Critically Endangered on IUCN Red List. To put it bluntly – the chances of you trapping an eel on the banks of the Thames today is laughably small.

The reason for the European eel’s population decline isn’t just overfishing - It’s a whole raft of attacks on their habitat and life cycle, including concreting river banks; water and air pollution; and barriers to migration like dams and river locks. Traditional fisheries in the UK still tend to catch adult eels for the UK market, but the last 15 years have seen an increasing demand for ‘glass eels’ - or baby eel - for export to Asian markets. The price of glass eel has soared to the point where, in the mid-2000s, it exceeded that of caviar. As you can imagine, targeting juveniles of any species is not good for their sustainability.

Add to this is that eels’ complex  life cycle and you can begin to grasp why they’re in hot water. Eels are born out in the deep sea and then migrate to freshwater streams where they live most of their lives; they only return to the deep sea to spawn young and die. Because we don’t fully understand how eel populations inter-breed and disperse, experts are unsure how much fishing the European eel can sustainably withstand.

If we want to see eel in our rivers for generations to come then we need to take action to allow populations to recover. Demand from restaurants should not be driving unsustainable fishing (no critically endangered species has a place on a menu) so if you see eel for sale, question it. There are other species of eel that you may see for sale in the UK, including Japanese and American, but they are also considered ‘Fish to Avoid’.

If you are r-eel-y keen for a fishy feast, there are many species that you could eat instead. Eel basically has very little flavour – it’s all about texture and tradition. For smoked eel, try any other smoked fish; for example, trout or hake. Herring is a brilliant replacement for pickled eel and for London’s famous jellied eel; its meaty texture and pale flesh is almost identical to the real thing. It’s also much better for you, packed with omega 3 oils and much cheaper to buy from a fishmonger. Herring doesn’t produce the same gelatinous stock when boiled, but other ingredients can be added for the same effect.

Even with the Sustainable Eel Group working hard to increase European eel populations they acknowledge that European eels won’t be sustainable for many decades. At the moment they are aiming to improve research and are asking fishers to use lower-impact gear and record data that will help improve conservation efforts. Sam Stone, head of fisheries at the Marine Conservation Society, is sceptical about any ‘sustainable’ badge for European eel, saying: “The standard would need to be so rigorous that it might be impossible to deliver in practice.” So for the fors-eel-able future, eel should be off the menu.

Sustainable Fish Cities is aiming to see only sustainable fish on menus in the UK. You can find out more here: www.sustainweb.org/sustainablefishcity