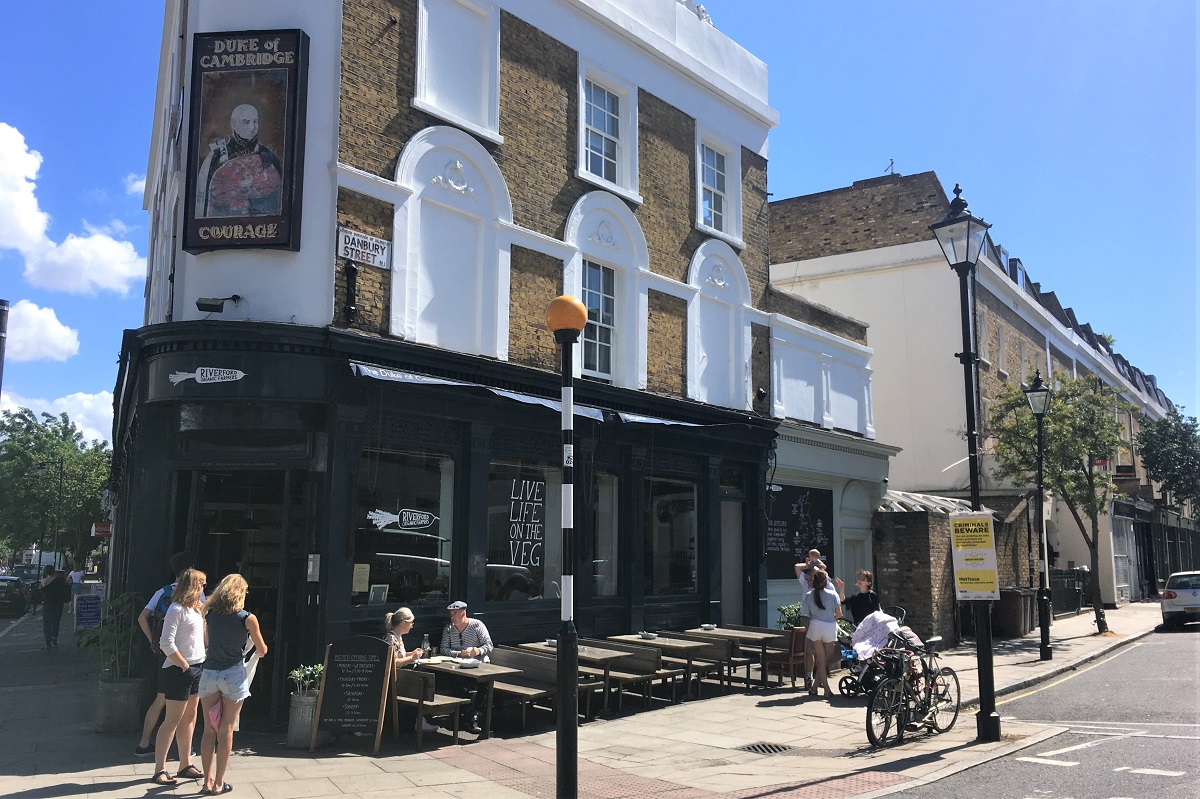 The Duke of Cambridge by Becky Glass

Is there a better way to enjoy the unusually blistering sunshine than arguing about Brexit in a beer garden, a glass in your hand, asks Becky Glass.

Yes, there is, and it’s not just by dropping the Brexit chat (doing that’s essential): It’s taking yourself a pub where your money supports sustainable sourcing and an eco-friendly ethos.

Dalston Eastern Curve Garden is a deconstructed pub. It’s a beautiful community garden, with overgrown plants and a hodgepodge of chairs and tables, which is funded by sales from its bar and kitchen. Sourdough pizzas are made in front of you using fresh, carefully-picked ingredients from local suppliers: most veg comes from the local farmers’ market, while their basil is from local workers’ cooperative OrganicLea. It’s all served, on sugar paper plates, beneath a canopy of fairy lights by night and sun-dappled branches by day. Definitely one of the best and most beautiful places to drink.

A staple in lists of noteworthy London pubs, Islington’s Duke of Cambridge is the first and only pub to offer a fully certified organic menu and drinks selection. The team is rightly proud of their long-standing commitment to responsibly-sourced meat, fish and vegetables. These come from north Wales’s Rhug Estates, Cornwall’s Kernowsashimi and Riverford Organics, respectively and are turned into an eclectic and interesting menu.

The Orange in Belgravia is by far one of the best pubs I’ve been to in London. The surroundings are elegant and understated, two generous rooms with windows opening onto a sunlit terrace. As with the other members of the Cubitt House group, menus are created around ingredients hand selected by the chefs, who visit the small, family-run producers themselves. The food is phenomenal, as you’d expect from somewhere that takes such care.

Over in Shoreditch, The Long Arm brews its beer in-house, with bar tenders pulling pints straight from the tanks. The difference in taste is impressive - very fresh and characterful. The spent grains are fed to fish in an on-site aquaponics system, which grows herbs and salads. The young, buzzy vibe is noteworthy too: zero-waste operations are not, it implies, the purview of upper-middle-class Waitrose shoppers, but of lads on a night out too.

Bloomsbury’s Blue Lion gets its food from local, ethical suppliers (including Nature’s Choice in Covent Garden, IMS of Smithfield and M&J Seafood) and maintains a changing, seasonal menu. Like The Long Arm, its genius is doing this in a straightforward, no-fuss way. This pub is unpretentious and hugely convivial, lined with enclaves hiding little tables, loads of natural light and a cobbled street acting as a beer garden in the back. The menu feels British, from fish finger sandwiches to the black pudding offered as a side, and is satisfying in a way only stodge can be.

The Three Stags of Lambeth North is an absolute gem. It’s comprised of a large, traditional-feeling downstairs room and an upstairs dining room but what sets it apart goes beyond the pub itself. They are huge supporters of the local community, currently hosting a small exhibition by a local artist and getting involved in all sorts of foodie initiatives. Not only do they recycle all their food, and other, waste but their menu is crafted from painstakingly-selected ingredients from suppliers based as locally as possible. The food is excellent, with a huge selection including white pizzas, made in the wood-fired stone oven upstairs.

The Marksman in Hackney (which in 2017 was the first in London to win Michelin Pub of the Year) is a supremely confident mashup. It’s an East-End boozer that has lost none of its old charm, with lamps lighting the bar that runs its length, darkly-panelled decor and locally-brewed ales on tap. But the staff and the menu come from a different universe: the British-inspired fare is strictly seasonal, selected with care and, from its presentation to its fantastic taste, is all sorts of surprising. Bonus: the roof hides a small beer garden that catches sun throughout the day.

Homerton’s The Adam and Eve is another old-school neighbourhood fave, recently restored to great effect. It’s spacious both indoors and outdoors, with its bunting-strewn beer garden. But better than the ample seating, huge bar and branded tote bags for sale, is the food. The majority of the ingredients are sourced from Cornwall and are delivered daily, and fresh herbs and vegetables are grown in the on-site gardens. The roasts are unassailable.

Other ‘Eely places to drink include: