“In December 2010, the GLA group launched its Sustainable Food Procurement Commitment, based on the London 2012 Food Vision. The Commitment forms part of our Responsible Procurement programme, and builds on our existing work to improve the social, environmental and economic welfare of London and Londoners. We recognise the important role that food and catering procurement can play in improving prospects for farmers and small businesses, environmental standards of farming and food production, and the welfare of farm animals. We are also committed to serving healthier options and helping to improve the health and well-being of our staff and of Londoners. We are delighted to see that more caterers and food outlets are getting involved through the Food Legacy programme and the various support services it promotes.”
Tim Rudin, Responsible Procurement Manager, GLA Group 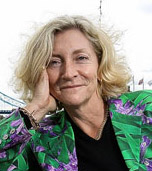 The GLA made a far-reaching commitment to healthy and sustainable food in the early stages of development of the Food Legacy programme. This covers hundreds of thousands of meals provided to London’s police, transport workers, fire brigade and Greater London Authority (GLA) staff and visitors.

Welcoming the announcement, Ben Reynolds of Sustain, an alliance of food and farming organisations [2] that now coordinates the Food Legacy programme said, “By agreeing to serve healthier food, the Greater London Authority has recognised its responsibility for the police officers, Tube and bus drivers and fire brigade, on whose health and wellbeing our city depends.”

“It’s great news that the GLA will invest their influential buying power in food grown to higher standards of fair trade, animal welfare and environmental protection, for example by promising to buy Fairtrade tea and coffee, seasonal food and sustainable fish. This is important to promote responsible farming and good fishing livelihoods, now and in the future,” said Kath Dalmeny of Sustain, who is also a member of the London Food Board. [3]

[1] Details of the Responsible Procurement Awards can be found at: http://www.london.gov.uk/rp/awards/

[2] Sustain is an alliance of around 100 food and farming organisations working to promote health and sustainability in the food system, see: https://www.sustainweb.org

[3] The London Food Board is chaired by the mayor’s food advisor Rosie Boycott, and helps to implement the Mayor's Food Strategy, ‘Healthy and Sustainable Food for London’, http://www.london.gov.uk/londonfood/

[4] The London 2012 Food Vision was launched in December 2009. For details, see: https://www.sustainweb.org/olympicfood/food_vision_launched/