During 2009, Sustain's Eat Somerset project is developing a proposal for work to increase fruit and vegetable growing in the West of England area (see map below for area boundary in red) for supply to reliable market outlets in the public sector. The proposal has been developed in partnership with four local authorities; growers; health authorities, schools and other relevant organisations in the area, who have all expressed their enthusiasm for and commitment to involvement in the project.

If you would like to get involved in this timely and important work, please contact Alison Belshaw at Eat Somerset: alison@sustainweb.org. Download a flyer with details of the project here [500 Kb PDF file] 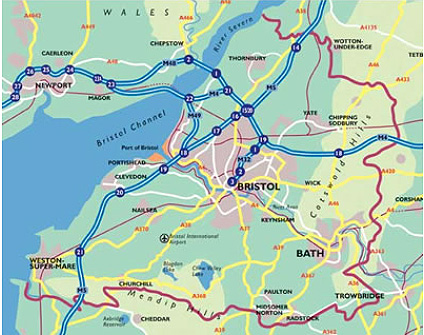 The aim of the project is to increase fruit and vegetable growing in the West of England area for use by public sector caterers (schools, care homes, hospitals). We will work to:

Eat Somerset: From 2006 to 2009 Sustain co-ordinated a food chain project in south west England that worked to increase trading between producer groups in and around Somerset and independent food retailers in the county, and create new markets in Bristol and Bath.